The TRN v80 is another in the flood or recent aluminum shelled hybrid in ears from China. It differs from most of the others in that it uses a snail drum shaped shell (similar to the Ny-06) instead of the CA clone that is so popular.   TRN has been a mixed bag to date for me with some good and some run of the mill items, so I went into this review ambivalent about what I might find.   I did have an issue with the first pair I purchased, so borrowed a 2nd from Durwood to confirm if the issue was isolated (QC) or a design fault.

The box for the TRN is a mix of other designs and works well enough. It is a white pressboard box with a line drawing of the iem similar to KZ while the internals are a tray in the top half and a flap to hide the accessories below it.   The packaging gives enough detail to know what is inside and is not gaudy or overdone, but really is also nothing fancy. At this price point that is not unexpected.

Inside the box we find the buds, cable, tips, and a warranty card. Again pretty utilitarian but expected at the sub-$30 price point.

The shells seam runs the mid-line between outer and inner shell and is well fitted. The line is visible but no high spots or gaps are present and it is difficult to feel without use of a fingernail. Until recently the only color option was royal blue but TRN has now added a purple and red option for those wanting another color. I applaud TRN for focusing on the more important things first and not releasing multiple color shells while failing to attend to more basic aspects of the IEM as some others have done.

Venting of the two dynamics is handled by a single vent behind the nozzle on the inner shell and 3 port hole vents on the bottom of the faceplate.

Connectors are standard bi-pin and if I had one knock on the fit and finish of the v80 it would be that the connectors are not fitted to the shells and some gapping between the shell and the connector is visible at the surface. This gap is not all the way through so doesn’t act as a vent, but does look unsightly.

Worth noting is that I found 3 different sets of specs between the packaging and the web so I wont publish any of them but will say the TRN v80 is easy to drive and actually fairly easy to over-drive so seems to have a high sensitivity and a fairly low (ballpark 32Ohm or less) impedance.

The cable is the same as that shipped with all previous generations of TRN earphones. That being said, it is a solid offering and many have ordered them as an upgrade for Kz and others. The cable is a four stranded braid with a 3.5 straight jack and a metal splitter at roughly the mid-point. The cables have very little strain relief as the pairs exit the splitter and head to the bi-pin connectors. Strain relief at the connectors is provided by a memory wire.   Angled bi-pin connectors are made of a hard resin and may be uncomfortable for some depending on positioning.   TRN has sold a lot of this cable as an upgrade to earlier Kz models. It would be nice now that Kz has stepped up their stock cable if TRN would do the same and released a new version that was another step above the competitions.

The snail drum shape is a comfortable fit but is a bit on the large side and may be too large for some. I found the v80 to be a bit heavy and shallow fitting so the memory wire helped keep it from having some wobble during periods of movement.

The TRN-v80 is a tough one to write up because the sound signature varies.   The seal is always critical and none of the stock tips fit perfectly so I traded out for Auvio wide-bore (L) tips to solve that issue.  Also, listening level is very important when discussing the v80.   The current requirements of the BAs is substantially lower than that of the dynamics so at low volumes the v80 comes off as a treble cannon.   As volume increases,  the Bass and mids first come up to meet the treble and then pass it and keep going.   At high volume levels, the v80 becomes a bass foward very warm signature.    My notes are all based on volume in that mid-range where the best balance is attained.  Understand that if you listen at extremely low or high levels, you may find significant differnces in your experience and this review.

The bass on the TRN-v80 extends fairly deeply and had no trouble reproducing test tones until well down into the 30mHz range.   If there is a draw-back to the sub-bass it is in the quantity as quality is better than expected at its price point.  Mid-bass is substantially forward of sub-bass but does not have more than trivial bleed into the mids.   Both share good texture and make the v80 a very good choice for those wanting bass quality rather than sheer quantity.

Mids are recessed compared to both bass and treble with the lower  mids being particularly behind.  This is expected  in a hybrid at this price point.  What isnt expected is the detail level and timbre produced by the mids.  Vocals, while a bit thin, are natural sounding and well rendered.   The slight bass bleed gives male vocals a little extra warmth and results in a non-fatiguing quality with most vocals.

Here we reach a point where the v80 kind of falls apart for me.  At low volumes, the treble is screechy and can be very sibilant with female vocals.  The problem is, that same treble is always present, it just gets buried a bit at higher volume levels where the mids and bass come up to overshadow it a bit.  I found that there was some distortion present at higher volume levels so borrowed another pair (thanks Durwood) to make certain the issue was limited to my sample.  The second pair did not distort as much as the first but was still prone to the occasional oddly aggressive spike so I think it more a matter of degree than QC issue.  At middle volumes, with the treble in balance it is easily the weakest point of the v80.  At extremely low or high volumes the aggresive nature of the treble can make the v80 very fatiguing.

TRN has made several IEMs now, and has kind of a speckled reputation.  One will be better than expected, the next will be pedestrian by comparison.  Unfortunately, the v80 fits some of both of those profiles.  The bass and mids are better than expected while the treble is pedestrian at best and ruins an otherwise good iem at worst.   My hope is that TRN will keep the bass and mids of the v80 and replace the BA drivers or re-do the tuning.   The v80 is quite an accomplishment for $26, but with a little work on the treble, they could be a serious contender for the Sub-$100 best buy title. 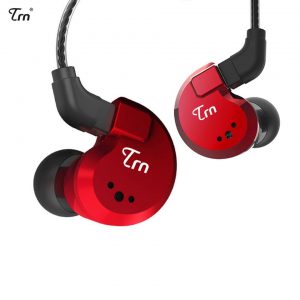 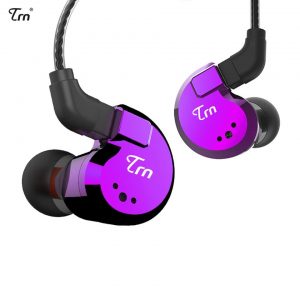