I was originally sent the Opus #1s by Ngoshawk to take a look at. His comments about the little player had intrigued me as he had fallen in love with the Opus #2 and said the #1s wasn’t far behind it and the price was more in my range than the #2. After listening to the Opus #1s for less than a week, I asked Ngoshawk where I could buy it and a deal was quickly struck. In some ways, that may spoil a bit of the suspense here, but the Opus #1s is going to be a polarizing unit so read on.

The #1s comes in either blue or purple frame but honestly the color is very limited as it covers the sides and the beveled edge of the front and rear. The drawback is the body is abs plastic instead of a metal frame but the unit feels sturdy in hand and weight is heavier than most.

The rear surface is black glass with a cross hatched pattern that makes the plate appear gray from a distance. 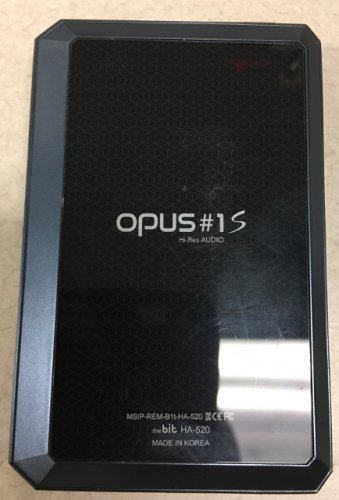 while the majority of the front face is glass with the 4 inch screen taking up a good 90% of the overall space available. This is a nice change of pace as some others in this class do not utilize the screen real estate nearly as cleanly. The screen has a 480*800 resolution so not the highest of the current DAP offerings, but plenty to display album art without blur and text is crisp and sharp. Also worth noting, the screen supports a fairly wide viewing angle unlike several others I have recently tested that washed out pretty severely unless viewed directly.

The unit ships with a screen protector installed which helps and a really well made leather case is available albeit at an additional cost. I highly recommend buying the case (unlike the Onkyo I recently reviewed) as fit and the protection it provides are great without marring any of the controls. The only drawback to the case is again it blocks the sd-card slots so must be removed to change cards.

The bottom of the player has a single micro-USB port to handle the charging and data transfer details. The port is nicely recessed to give a bit of added stability.

On the left side of the player, dual micro-sd card slots sit at the bottom and are neatly covered with a panel that fits flush with the frame. At the top left are the volume controls which have a nice tactile click that makes it easy to use in a pocket.

The top of the right side of the player has the play controls (back, play/pause, forward) again with good tactile click functionality.

The top of the unit has the 3.5mm Single ended output on the left, the balanced 2.5mm output near the center and clearly labeled as balanced out. And the power button on the far right. Overall the layout is very clean and functional.

Internals:
The #1s uses an A9 processor at 1.4ghz with 1gb of RAM to handle the OS duties. This would be on the low side for a full android implementation but for the stripped down UI on the #1s it is plenty.

DAC functions are handled by a pair of Cirrus Logic 43198 chips that support up to 24/192 and supports most popular file types including MQA and DSD.

Battery life is very good with all day playback between charges being normal. If extremely high impedance headphones or low sensitivity headphones are used battery life will drop accordingly. I was able to get 6+ hours using the Fostex t50rp at normal listening levels and that is quite a feat as the same headphone drained the M3s flat in a bit over 4.

#1s supports usage as a USB DAC, as well as use as a transport to another DAC/AMP through its micro-USB via a usb otg cable.

Thebit states that the firmware is Android but other than a few telltale hints, you’d be hard pressed to tell it by looking at it. The main screen has the first hint of android in its top bar. 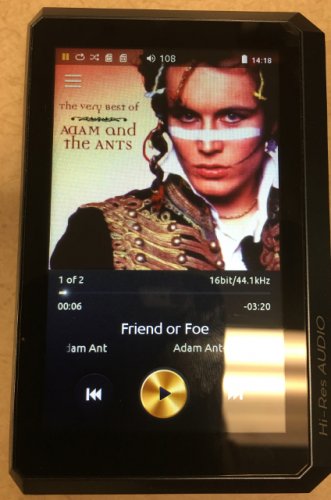 This looks typical of android and shows status icons for volume, card status, battery etc. When you start the player, it first goes through scanning the sd-cards (minor annoyance as it does this every time). It will display the main page and show a turning gear in the upper bar slightly right of the center part to signify the card scan. The second hint is that the options menu is accessed by swiping down from the top to open a larger version of the top bar with line out, equalizer, sleep, repeat, shuffle, and brightness controls. 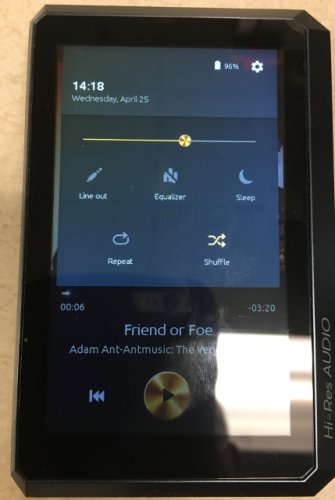 A gear in the top right corner opens the settings menu that allows control of screen, eq, gapless playback, line out, and gain, along with setting the time, usb mode, and storage options. Firmware updates are simple to install. The firmware is placed at the root of an SD card and from the settings menu, the update option starts the process.

Immediately under the top bar, at the left is another hint. The three horizontal bar icon that opens the file menu. This gives you the options to choose between artists, playlists, titles, genres, folders, or favorites. 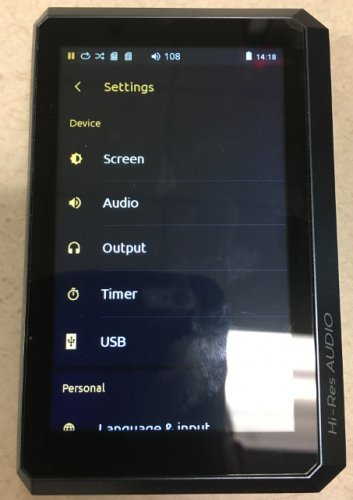 A proper search function would be very appreciated as that is the one feature the UI lacks that would make use easier.

The main screen provides all the details of title, artist, bit rate, and length as well as the ability to scroll within a track. The front and back function is provided on screen as well as play/pause in addition to the physical buttons on the side. The downside to this is that playback can jump around when the DAP is in a shirt pocket unless the screen is turned off.

The UI doesn’t pack a ton of features as no options for wireless, Bluetooth, loading android apps, or streaming are provided. The upside of this is that the UI is fast and rock solid stable. I have not had a single crash in the entire 2 months I have owned and been using the #1s which puts it in a league apart from most others I have tested.

The focus of the Opus #1s is clearly on sound quality instead of optional features and when you make a conscious decision to focus on one aspect at the exclusion of others, you better get it right. The Opus #1s delivers sound that few other DAPs can match. Sound is thick, lifelike, and very smooth without masking detail or losing clarity. Soundstage is spacious and instrument separation is on par with home hi-fi component DACs. I could happily substitute the #1s for my Bifrost and never miss the later. Output power is good with single ended devices and fantastic with balanced connections. I had no trouble powering any headphone I wanted with the #1s without the need for an external amp (although battery life does take a hit).

The #1s is so smooth that at times it can feel like it lacks extension. With more listening you realize the extension isn’t lacking, it is just so organic and smooth that it lulls you into a false sense that it must be rolled-off. The #1s has good dynamics and can hit on both ends with good authority when called upon but the real center of the #1s is the mids.

Lows are full bodied and are crisp and clean even at the depths of the players extension. At the absolute low end, the player does roll-off a bit but still does a good job of reproducing texture and actual instrumentation and not just thump. Bass quantity manages to walk the line between solid bass performance and bass bleed into the mids. Sub bass has authority without the mid-bass taking over the signature and making the player overly warm.

Mids are slightly forward with lots of detail and good dynamic range. The mids allow vocalists nuance and emotions to show through the instrumentation in the background and produces a listening experience few other daps have come close to.

Treble has good extension with ample air and sparkle while still maintaining good detail. There is a hint of grain to the lower treble but it smooths out as it climbs into the upper registers. Overall, nothing to complain about at all at this price point.

Soundstage is hard to define as it is certainly wider than deep but manages to maintain considerably better than average instrument separation and imaging even with the limited overall size of the stage. Overall, the soundstage could be thought of as a theater in the round with a decidedly intimate feel while still maintaining excellent realism.

The words to define the sound of the Opus #1s is natural, smooth, organic, and emotional. The nice thing is that this allows the #1s to pair effortlessly with a wide variety of headphones and earphones and sound equally good with all of them.

I found the #1s to be equally at home with the Campfire Comet, the Brainwavz b400, and the Magaosi K5 in ears as well as easily driving the Fostex t50rp and still being very pleasant with the Sennheiser HD700. Truly a rare bird in the ease with which it pairs.

To my ear, the closest competitors to the Opus #1s are the Cayin N5ii and the AK70Mk2.

The Cayin N5ii is a bit thinner and more analytical than the #1s and is more neutral when compared to the slightly warm sound of the #1s. Most other factors are near equal with soundstages and instrument separation being on-par with both. I could be happy with either the N5ii or the #1s as both are truly stellar, but the #1s signature makes it easier to listen for extended periods for pleasure as it is smoother than the N5ii.

The AK70Mk2 is the DAP by which most others are judged for me as it does so many things well that it is tough to beat. It combines a sound that is near the Opus #1s with the features of the N5ii and an intuitive UI that bests either of the other two. On sound alone, I think the Opus is better, when you combine everything, I still think A&K is the benchmark. One more update to the Opus and it may well catch the A&K as both TheBit and Cayin are getting closer to that level of performance with each new iteration.

Opposite the N5ii comparison, I find the Opus #1s to be a bit more neutral than the Shanling M3s as the Shanling has a bit too forward lower mids for my tastes. The #1s also has more detail and better dynamics than the M3s. The differences are not huge, but I favor the Opus. The other big drawbacks on the M3s is single card slot and poorly implemented display.

As stated at the start, the Opus #1s is going to be a polarizing device. On the plus side, if you (like me) listen to music from your personal library and are not interested in streaming or Bluetooth headphones, this is the best sounding dap that $400 will buy. As a matter of fact, it may be the best sounding dap that $700 will buy as I think you have to step up substantially in price to something like the ibasso Dx200 to see a distinct improvement in sound quality over the #1s. On the flip side, if you intend to stream audio from the web or use Bluetooth headphones, then the Opus #1 is not for you. I chose to purchase the Opus #1s as for me, the number one pursuit in this hobby is for that perfect sound and the #1s comes as close to that as my budget will permit. 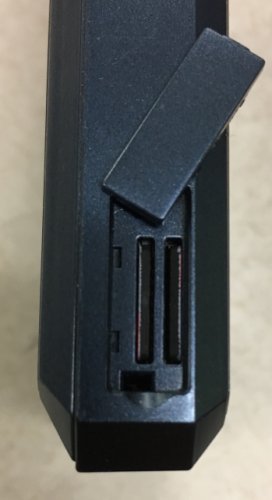