My most recent review of a KZ product was for the Zs10 which was probably my least positive review of a KZ product. I bought them from an Ali store at pre-order price and got a pair that was defective as shipped, (The seller refused to replace – and thus why I prefer to deal with Gearbest) and even when I corrected the defect by resoldering, remained unimpressive. I debated skipping new next few KZ models and waiting for them to change course as KZ had not come out with a product that was an improvement on previous efforts since the Zs5 v1 and in most respects had taken a step backward with each successive release since. The ZsR was a mixed bag and the the Zs10 was just plain a step in the wrong direction. It looked like KZ had lost their way in the woods. It was against this backdrop that a small package from Gearbest arrived. In it, a review sample of the new ES4. If you find yourself interested in the ES4, I suggest you check Gearbest.

Packaging
The ES4 arrived packed in the standard white box with the slip cover that most will be familiar with from KZ. Upon sliding the cover off, the first surprise is that for the successor to the ES3, they look very little like it. When I removed the plastic tray, to find the cable, I found the cable had also been upgraded since the release of the ES3 and was the newer improved style. Also, in the box are 3 sets of tips (SML), a small instruction packet, and a warranty card. Nothing out of the expected as this has become standard KZ packaging over the last year or so.

Build Quality
Build is very reminiscent of the Zs10 in a slightly smaller package. Transparent plastic shell with the electronics exposed to the outside of the shell and the drivers clearly visible to the inside. The 10mm dynamic is housed in the shell while the BA is visible in the nozzle with the tips removed. Shells are marked R/L immediately in front of the 2-pin connector. The connectors themselves are recessed nicely and show no sign of slop, loose fit, or excess glue. I have spoken to the new KZ cable in a couple of previous reviews but for those who might not have read about it yet, the cable is a step up in microphonics and isn’t nearly as sticky as the previous KZ standard. In the overall, I think it is progress in a positive direction. The one item that took a step backward on the cable from the previous generation is the strain reliefs at the jack and splitter (both sides) which are no so short as to be worthless. Make the cable style you are now with the strain reliefs extended 5mm in all cases and I would be happy to buy KZ cables to put on other brands of IEM. The cable itself is as good as any I have seen that weren’t handmade at considerably higher cost and with a bit of tweaking would really be a super value. 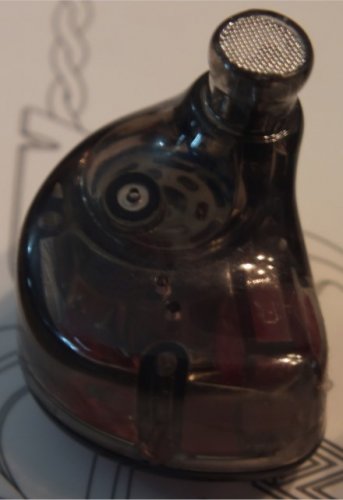 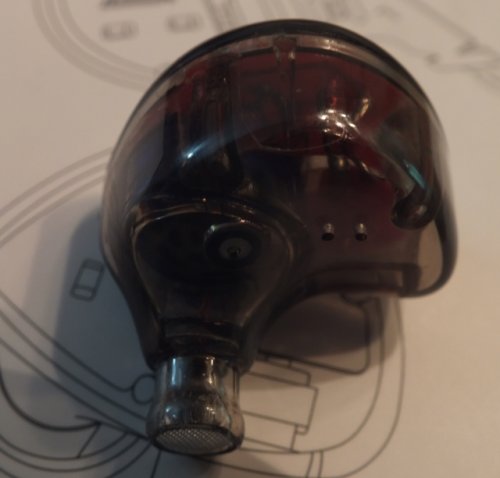 The ES4 did not look like what I expected it would at all. I pulled an ES3 out of my box and looked at them side by side. “Why did KZ choose to call this thing the ES4?” Its shell isn’t the same shape, it looks nothing like the ES3 in shell color either. If it has anything in common with the ES3, it will have to be in the sound department because in looks, it’s a baby Zs10. At this point, I have to admit I was going into this review with a bad attitude. The Zs10 was not a favorite product for me and I had found the ES3 to have a comfortable fit but suffering from the typical house KZ signature which can best be called V with a mohawk. Recent KZ offerings have consistently had a big V tuning with good extension but a pronounced spike in the treble that cuts through most of the signature. The ES3 in addition to a V shaped tuning had a tendency to wash out what mids were present with mid-bass bleed. So now I have to listen to a combination of the ES3 and Zs10. I wasn’t expecting good things. 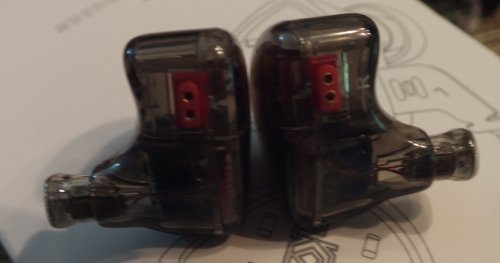 Sound:
(I found the ES4 to be sensitive to which tips were in use and insertion depth. If you find yourself hearing something other than what other people are reporting – try wider bore tips and seating the tip so the opening is even with the nozzle face rather than the nozzle sitting in the tip. I found these changes made a difference.) 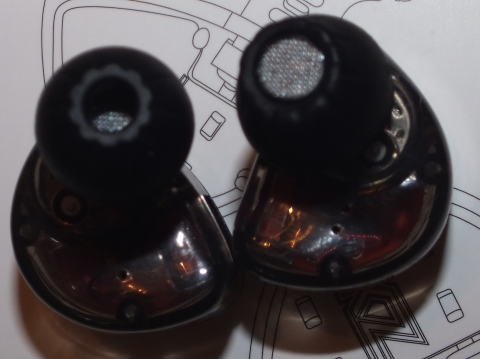 Bass
The ES4 has very good bass extension and quantity. Impact of the sub-bass is felt and definitely emphasized but the mid-bass takes a step back and is better controlled than previous offerings. Bass bleed is minimal and shows a definite improvement over the ES3. For those that like a sub-woofer in their in-ears, the ES4 delivers in spades.

Mids
This and the ED16 are the best KZ mids to date. Whoever at the factory that was supposed to scoop the mids must have had the day off as they are more present in the mix than any other KZ in memory. I still hear the ES4 as a V (and the FR graphs prove that out as the mids are nearly 5db behind the treble and 7-9db behind the bass) but the sound is so well proportioned that it does not listen like a big V but more like a shallow V with a lively presence region.

Treble
The ES4 still has some extra treble energy but manages it better as that energy fits with the rest of the signature rather than carving through it like some earlier models did (Zs6). The high-hat and snare in Lenny (SRV) were both well rendered and not overly sharp or metallic. I did find some very mild sibilance in Tedeschi’s tracks but not more so than is produced when using my HD700s so this may well be the track itself.

Soundstage
The soundstage is wider than deep doesn’t show a lot of height. Here again this is somewhat tip dependant as I found I could influence stage dimensions with the bore of the tips. In all instances, it is fairly intimate, but I could make the stage deeper and narrower by using narrow bore tips or wider and shallower by going to the wide bore tips. (Ymmv as this is the musing of an old fool).

Instrument separation
Seperation was good throughout my audition with only mild crowding on large orchestral pieces. (This again unlike some previous attempts that sounded as if the philharmonic had been crammed in Volkswagen bus and then asked to perform).

The one issue I found with the sound on the ES4 is common to many multi-driver IEMS and that is they sometimes suffer a bit right at or around the crossover frequency where drivers get out of phase with each other. The ES4 can occasionally display this behavior but for the most part this was something you had to be looking for to find and not a major distraction.

Conclusions
Overall, the KZ ES4 is an easy recommendation for those that want a lively, bass forward, IEM to use for casual listening. They are not the most detailed IEM in the KZ line (Zs10) nor are they the most neutral (ED16 is closer with a bit of EQ) but they are listenable for extended periods without fatigue and they bring a liveliness and a passion to music which makes long listening sessions seem shorter. Bassheads may think the ES4 falls a bit short and those looking for a near neutral will find the ES4 overly colored but for all those who just want something good to listen to, the ES4 is a lot of fun. My bad attitude has subsided and now I am wondering if I should buy a backup pair.