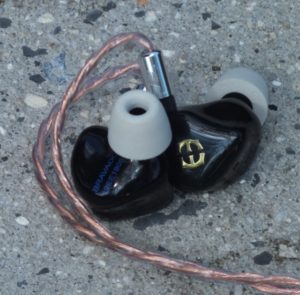 First off, a heartfelt thank you to Devin and the Empire Ears crew for entrusting me with both the Bravado and the ESR as part of the review tour.   I have thoroughly enjoyed my time with both and look forward to trying additional members of the new product lines.

The outer package is a side opening pressboard box done in flat black with a silver Empire Ears logo on the top and the Name emblazoned on the flap.  While not particularly obnoxious, I will say that Empire missed no opportunity to brand absolutely everything in the package.  Inside the box is first a cardstock quick start guide again emblazoned with the large wings.  Under that a large black drawstring cloth bag also with large silver logo.  Under that, the hard case.  The hard case has an aluminum inset in the lid with the logo, branding, and model designation written in black.  The interior of the hard case is well thought out with protective compartments for each earpiece and a larger compartment for storing the cable and a small compartment for the cleaning tool at the end opposite the earpiece compartments.  Under the hard case are a smaller cloth bag and a set of cleaning clothes. (Also in matching black).   Honestly, if each piece was seen independently, the branding is tasteful and not overstated.  When taken in all at once during the unboxing process, it can get a bit overwhelming as the cleaning tool was the only component that I did not find an Empire logo or branding on. 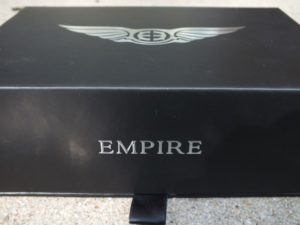 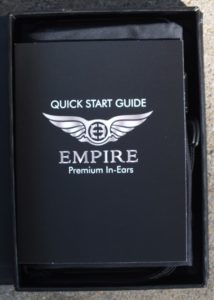 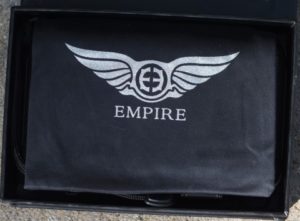 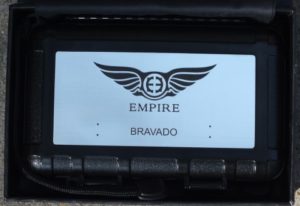 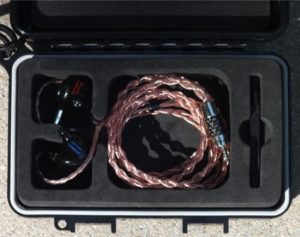 As previously mentioned, the package comes with a good assortment of bags, boxes, and wipes, but the tips, cable accessories etc… were all shipped separately.  This may be a tour thing or it may be that with the arrival of two sets of IEMS that the shared items were not duplicated so were sent outside the packages.   Accessories include the previously mentioned hard case, large cloth bag (that the hard case fits in) small cloth bag, cleaning wipes, and tip cleaner, in addition to Final Audio Type E tips, an Effect Audio 4.4 to 2.5 Balanced adapter, a 2.5mm balanced to 3.5 Single-ended adapter, and a package of alcohol cleansing wipes.  A cardstock page with details of the ESR and Bravado was provided as well and since both models are included, I would assume that item was specifically for the tour and not a standard item shipped with retail purchases.

Overall the kit is fairly complete although a couple additional tip options (Comply, spin-fits) would be welcomed as none of the provided tips was a perfect fit for my ears. (more later). 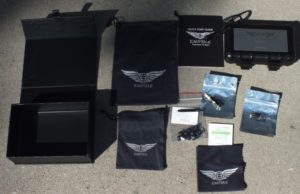 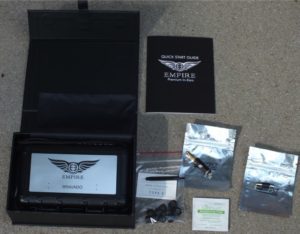 The IEMs themselves are a deep gloss black with a subtle Empire logo on the faceplate and the model and serial number written on the underside of the earpiece.  Build quality is fantastic as seams are blended so well as to be difficult to detect without magnification.   The bi-pin connector is so well fitted that was the color not slightly different it would effectively look like it was one solid part.   Had I not previously been told the shell was a high impact plastic, I would have thought they were made of ceramic as the polish is that good and the seams that invisible.  Overall, a masterful job.  The only difference in the ESR and bravado in the shells is the number of ports in the nozzle as the Bravado sports 2 ports while the ESR has 3. 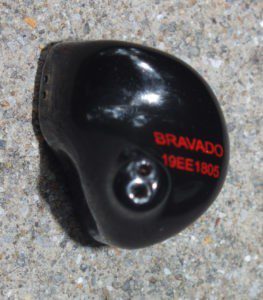 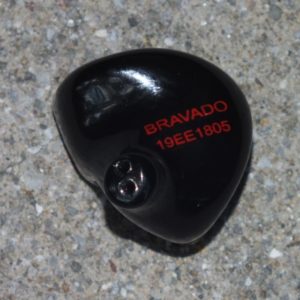 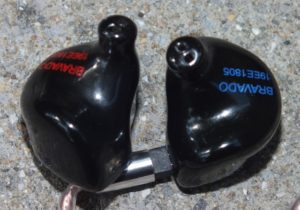 Both models were supplied with Effect Audio cables which have a sterling reputation for performance at with a retail of $150 for the cable alone, they should indeed perform well.   The cable itself is thicker than some but still very pliable and microphonics were kept to a minimum as the earhooks on the cables were effective in preventing cable weight from transferring to the earpieces themselves.    My complaints with the cables center around two items.  First, nowhere on the length of either cable exists any strain relief.  Not at the jack, the splitter, or the earpieces.   For a cable in this price range, I expected that they be designed in a way to assure longevity.   I am probably harder on my iems than some as I wear them almost constantly during the work day and if purchasing the Bravado or ESR for my personal collection (Which I intend to on the Bravado) I will purchase a different cable that I feel offers better longevity. 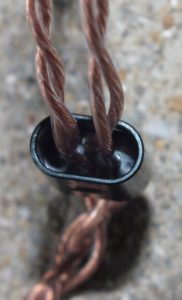 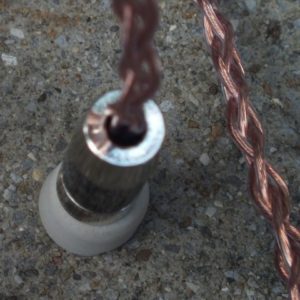 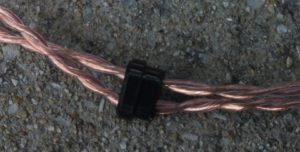 The Second issue is the adaptors.  Quite simply, they do not work well and should be avoided.  I had numerous cut-outs while using either of the adapters and slightly twisting the connector in the adaptor would cause the channel to come back but at the expense of clicks or pops in the sound while moving the connector.   If you need two different cables for use with different DAPs or amplifiers, I would strongly suggest you forego the adaptors and buy additional cables.  I used a Norne Audio 3.5 Single Ended to bi-pin cable to do my single ended testing once I realized the adaptor could not be made usable.

The earpiece is on the large side but is deceptive in that it weighs very little.  They sat in my ear without trouble and the earhook on the cable makes them feel weightless.   Isolation is only average as the bulk of the earpiece sits well behind the ear canal.    I did have some trouble finding a set of tips that both fit my ear and were comfortable.  The large tips were too large to wear comfortably for extended periods while the mediums were just small enough to lose seal when I moved.  The nozzles are standard sized so a quick search of my tips yielded several pairs that worked and I ended up settling on comply foams as they offered the best combination of comfort and seal.  They likely tamed the treble just a bit but in testing with large spin-fits, I found that my observations held consistent so I do not think tip rolling dramatically influenced my listening experience. 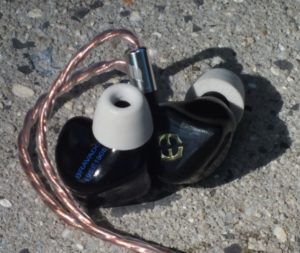 Lows – The Bravado has taken sub-bass to a new level.  The W9 driver provides an absolutely visceral experience that can only be compared to the first time you felt the sub-bass at a THX theater.  By encapsulating the dynamic driver, Empire has managed to combine the best features of a dynamic (Slam and depth of extension) with the best features of a BA (Attack and decay) and created a very crisp and clean sound but with an impact not normally seen without becoming muddy.  Mid-bass is heightened and gives the overall sound a bit of warmth without overwhelming the details.

Mids – lower mids are behind the rest of the signature and mids, in general, are probably the low point of the Bravado.  Detail level is good but not great (See ESR for that).  There is some minor bass-bleed at times leading to a further warming of the signature.

Highs – The Bravado is very treble forward which can be a bit harsh if the track tends that way.  Cymbals were reproduced well and female vocals benefit from the extra energy in the lower treble.  Flute and upper strings can get a bit strident at times and I found that when listening to tracks like Hunting Girl (Jethro Tull) a slight decrease in EQ of the 7-9kHz range made a much more listenable signature.  I did find this to be very track dependent and the EQ was not needed on fully 80% of my review materials so it may well mean the tracks that exhibit the harsh treble was mastered a bit too hot at the outset.

Stage – Soundstage is wider than deep with a reasonable sense of height.  Overall not exceptionally large, but not overly crowded and separation is fantastic.  Layering is better than expected and large orchestral pieces are better rendered than expected by a two-driver arrangement.

Empire refers to the Bravado as their “Entry level” iem.  To put this in proper perspective, the Ford GT is an entry level super-car.  While the GT lacks the subtleties and refinement of the  Ferrari Portofino, the pure power is there and given the right driver, the GT can occasionally outrun its more refined counterpart.   The Bravado is the Ford GT of the Empire stable and while it may lack the finesse of the Legend X or even the ESR, the Bravado is a far cry from the headphones that came with your smart phone.

I will be the first to say that while I enjoy sub-bass, I am not a bass head and usually prefer a balanced signature.  I expected the ESR to be my cup of tea and the Bravado to be an also-ran.  Having listened to both for a week, I can say that despite the shortcomings with the Bravado’s mids, there is something hypnotic about them.  For Classic rock and Blues Rock, they are just about as good as I have heard.  The detail level falls a bit short for large orchestral pieces and I can’t recommend them for choral arrangements as the signature doesn’t lend itself to those genres, but I suspect that was never the target the Empire clan was shooting for.  With the vast majority of current music being in the hip-hop, rock, and pop flavors, the Bravado has plenty of market to work with and will find a home with lots of listeners.   If most of what you listen to is rock, metal, hip-hop or EDM, the Bravado deserves your attention.  Yes, it is costly, but it just might be the end-game in-ear you’ve been looking for.