First off, a heart-felt thank you to George and Gearbest for providing these headphones to review.

The deluge of Bluetooth gear continues. My latest batch from George was again mostly Bluetooth based. Like it or not, the future seems headed in that direction. The subject of today’s review is the Edifier W806BT. Edifier needs no introduction to most as they have been around in the PC audio, gaming, and Bluetooth speaker market as well as the headphone game for some time now. I have had the privilege of testing several Edifier products in times past and use a pair of their speakers as monitors with my downstairs PC. The W806bt is an over-ear Bluetooth offering in the budget space with an asking price of roughly $40 US.

The W806bt comes in a retail labeled white box with the good descriptive information on the exterior. Most details are well laid out on the back of the box so packaging is typical for western big box stores. It is not however exceptionally sturdy. The box is a heavyweight paper rather than pressboard and in as such has very little support or structure. It would not be acceptable as a shipping case. Inside the box is an equally lightweight plastic tray holding the headphones themselves and a small box with the the charging cable and instruction booklet. 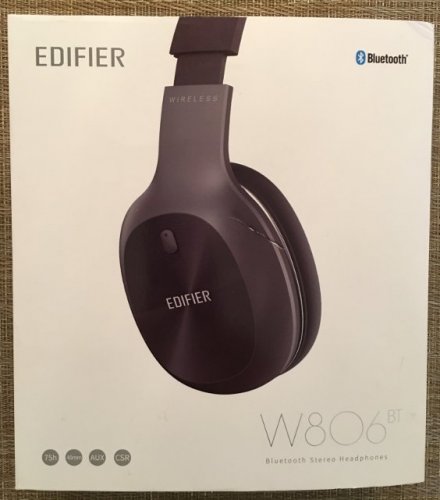 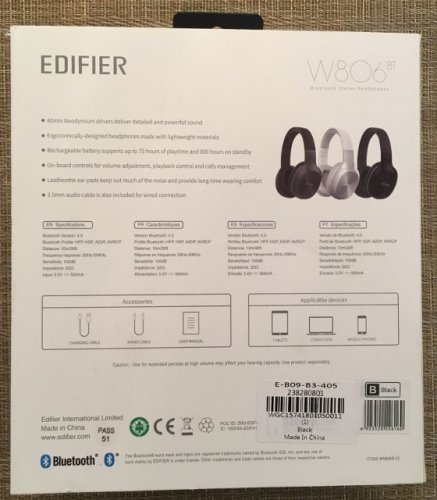 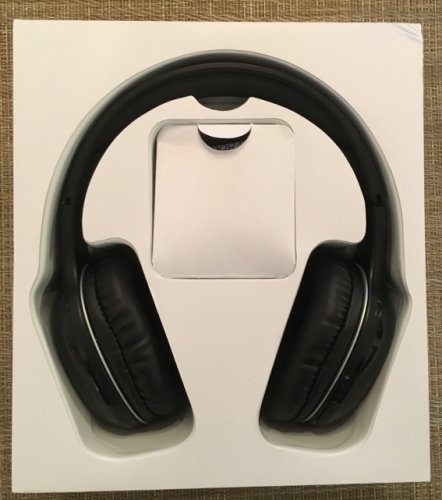 The w806bt is almost entirely plastic. Starting with the headband which is a matte black plastic on the outside and a vinyl pad on the inside. The Adjustments between the cup and band are plastic as well with a metal spring and durability is indeed a concern as movement of the cup has already begun to leave markings on the band where it has rubbed. Adjustments are positive and give about 2 inches of total travel per side so fit on larger heads should not be a problem. The cups themselves are gloss black plastic with a silver spacer and a black ring to hold the pads on. Pads are the typical slip over arrangement made of vinyl with a foam insert covering the driver itself. The on/off/pause button is on the outside of the right cup with the volume buttons being on the rim behind the 4 screws hold the body of the cup together. I removed the screws to see what sized battery etc. was hiding inside. The most interesting thing I found is that the driver is enclosed almost completely. No venting at the rear of the driver is present except for a hole large enough for the cable to pass. This unit is closed back so this is not a misrepresentation of the specs but it does limit the amount of air to the back of the driver pretty severely. 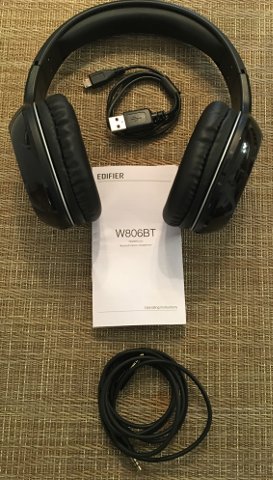 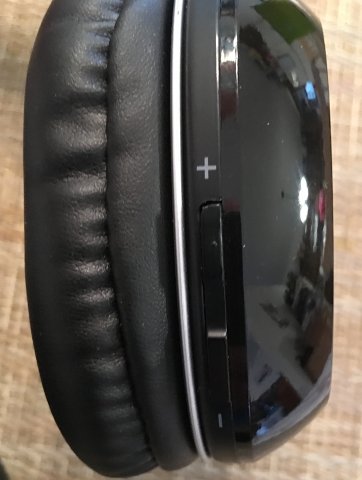 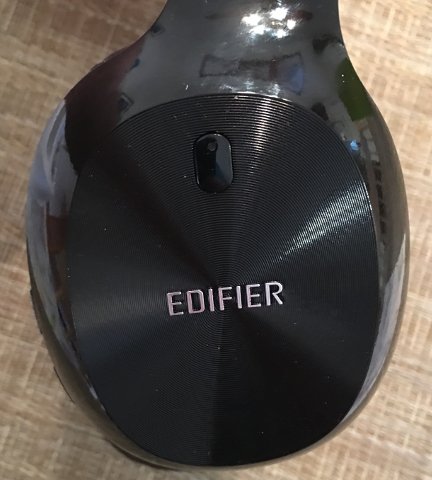 Here is a set of shots of the disassembly of the cup and the back side of the driver. 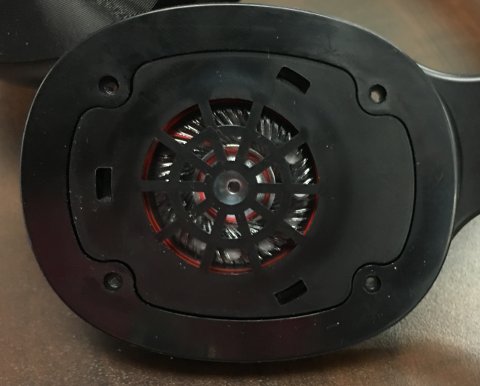 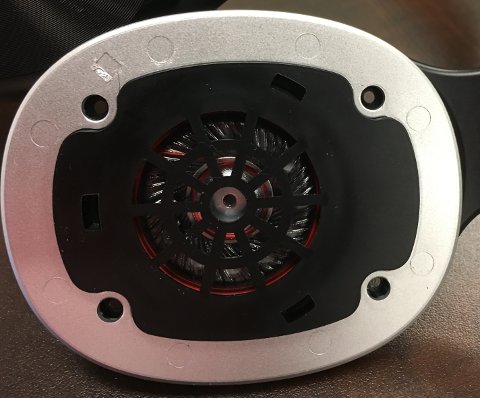 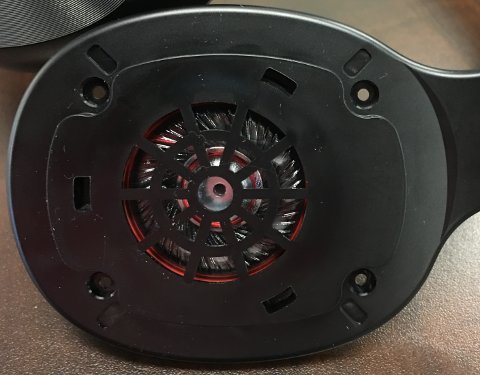 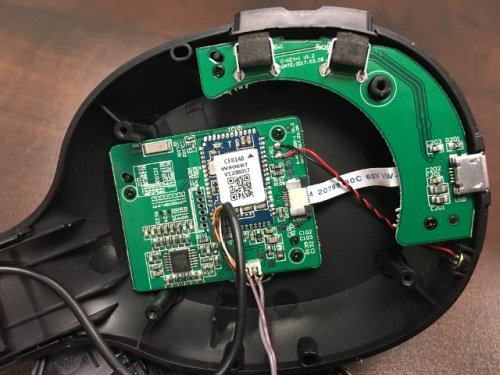 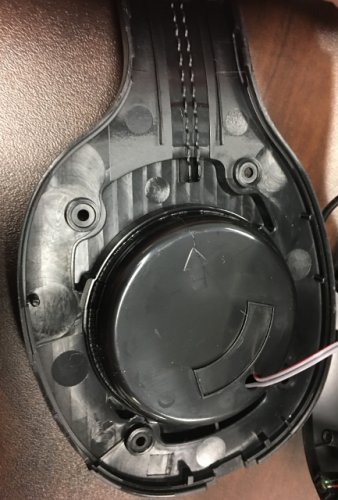 Notice the mechanism for the adjustment is built into the cup above the driver compartment.
​

Pairing is straight-forward and the prompts are pretty typical so this had no surprises. A long press of the button on the back of right earcup puts the device in pairing mode and the led blinks red/blue to indicate it is ready to pair. I had no difficulty pairing to my Cayin N3, and I-phone 7, and an HTC m9 android phone.

The buttons worked as advertised with all devices but lag on the pause button was more than usual and quite noticeable particularly when resuming play. At times I was reaching for the button a second time when the music resumed as I thought I had failed to hit it the first time.

Bluetooth connectivity can only be listed as average as distance from source was more limited than most as anything over about 10 meters began to decay and any barrier between the edifier and source caused hiccups. This may be partially due to the chipset being a 4.0 version, a generation behind current and AptX is not supported by these. Even a cubicle ½ wall between the source and the earphones caused connectivity loss at times. For working in an open area or sitting at a desk, these will likely work well. If you need something that allows you to be less tethered to your source, these are only moderately better than cabled options.

Sound:
Previous Edifier products have been class leading in sound reproduction in the budget price range so I had high expectations of what I would find with the 806. The immediate good news is Edifier has passed over the normal budget V tuning and chosen something much more neutral. While extension at both ends is somewhat limited, I found the signature to be more enjoyable than a lot of products in this space that boost the mid-bass at the expense of all else.

Bass: The mid-bass on the 806 is mildly overstated. Sub-bass is present but only barely and seems to be extremely source intolerant. At times I found the 806 to be completely devoid of sub-bass and then it would reappear on another track so something in the way it interprets signal is very source dependent. This made it hard to judge extension at this end so I ran a series of test tones and found it rolls off fairly substantially below about 100Hz and even more so below 65Hz. For my tastes, they got the mid-bass right, no dramatic elevations and large bleeds into the mids as is so common at this price point, but they seem to have sacrificed the sub-bass in order to do so.

Treble: Treble extension is poor. This is the single biggest flaw in the 806 as it contributes to a feeling of veil and lack or any air or sparkle at the top and it harms female vocals pretty solidly. Unlike the bass where it can be coaxed with a bit of EQ, at this end, the ability of the driver to produce these sounds just is not there. I tried EQing everything over 7Khz up 6db to see if I could induce some sibilance or energy in the upper range without any notable result. (Mind you it certainly didn’t help the sound signature, but it didn’t open them up noticeably either).

Soundstage is clown-car small due to the closed back design as shown in the build section and instrument separation suffers as a result of the stage size.

Overall, the sound of the w806 is better tuned with less of the pronounce V than expected but suffers due to driver choice and enclosure design.

One of the selling points of the 806 is an absolutely ludicrous claim of battery life. 70 hours or runtime? On a 1200mAh battery? Simple math says the only way that is possible is if the circuitry takes a ridiculously low amount of current to drive. Well, guess what, this circuit does take a very low amount of power and the battery life was over 50 hours in actual testing. What this tells me is the trade-offs in drivers used and limited Bluetooth range were deliberate in order to extend battery life. I am not sure I wouldn’t have split the difference and gone for a bit better extension on the drivers but for those where battery life is at a premium, this model will definitely have an appeal.