Disclaimer –     These were provided to me by Edifier in exchange for my honest review.    I’m a music lover, an engineer by trade (not a sound guy) and a hobbyist.  I make no claim to have a golden ear, nor do I pretend to know anything.  I took on this review with the idea that these headphones are being marketed at a price point that puts them in the category of “replace and improve the earphones that came with my phone”.  As such all testing was done with an HTC M9 and an Apple 6s+.Packaging – The box is nicely done in clear plastic with the buds visible in the upper section and the cord stashed in a smaller box inside.  They came with the buds, an extra set of foams, an adapter cable for phones with an alternate microphone connection (Apple), and a pamphlet with specs.  It would be smart to add a list of which phones need the adapter as nothing is listed.  If you use the headphones on an apple without the adapter the sound sounds like you are at the bottom of a pit. The same is true if you use the adapter on an android so it is important to differentiate the two. 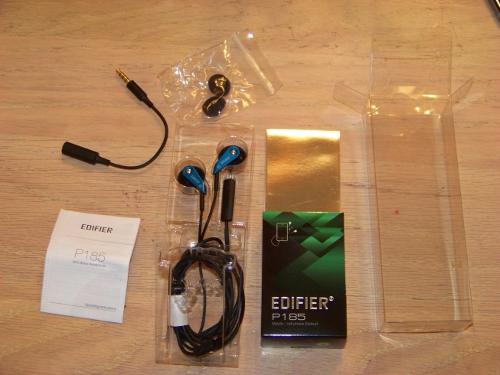 Build – The drivers are listed as 15mm with a 32Ohm impedance and are housed in a black plastic housing with 4 ports across the upper circumference.  The strain relief is designed into the housing and is a blue plastic and angled forward at about a 35 degree angle from vertical.  There is also a port in the inside of the blue portion of the housing.  The cable doesn’t seem particularly tangle prone and is soft enough that microphonics are not bad when moving about while listening. 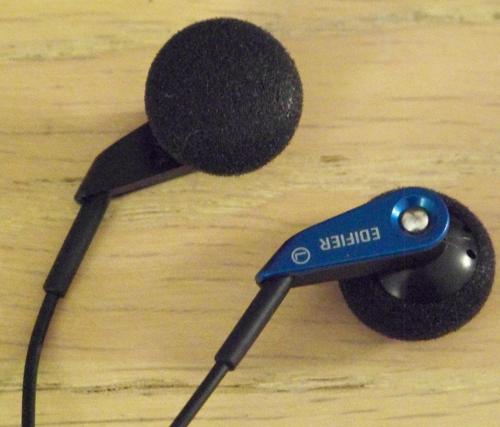 Sound – When I first un-boxed these and plugged them into my HTC phone, I thought, “How do I politely say “don’t get these”?”.  Before giving up on them, I decided to do a 24 hour burn-in using pink noise.  So I plugged them in, stuck them between two pillows so I wouldn’t annoy the dogs and others living here and left them.  What a difference 24 hours makes. Edifier should note this on the package as it will save a lot of returns.   Before burn in, these sounded like somebody had put a notch filter in the cable.  They had nothing below about 250Hz on the low end and anything over about 5k was severely rolled off.  After 24 hours, they opened up nicely and are much more what I expected them to be.

Bass – Good bass depth and quantity.  Extension is somewhat lacking due to the non-isolating design.  These are good for all but dubstep or heavy sub-bass tracks and the lack of sub-bass really didn’t interfere with musicality on most pop, rock and even a good bit of EDM.   I think the lack of sub-bass is something the entire category of non-isolating designs suffers from and shouldn’t be seen as a black-eye for these in particular.

Mids – Lower mids are slightly recessed with a pronounced bump between 5k and 8k.  It took some time to determine what it was since some vocals sounded very natural and others odd.  Most tracks did well with the mids but I did occasionally find a female vocal that was very forward and unnatural sounding.   A bit of EQ was able to correct this out of the tracks in question so I am thinking it is more a tuning issue than an inherent flaw.

Highs – Treble is forward and can become sibilant when listening levels are high.  At normal volumes this wasn’t an issue but these may not be the bud to “rock out” with your favorite alto or soprano vocalist.

In total, they provide a very listenable, musical signature once some mild EQ is applied.

Microphone – I do have to mention this as it was easily the weakest point of the P185 and the factor that differentiated it from the H185.   When used for phone calls on two different phones there was a persistent low frequency hum in the background that was audible on both ends of the conversation.   I tried with both an I-phone 6s+ and and HTC M9 and calls to land lines and other cell phones all uniformly had the same hum.  My hope is that this was just a bad part on the review sample.    For me, I would probably just get the H185 or use the phone controls on the P185 and skip the mic as I rarely use a mic anyway.

As I write this, they are in the washing machine in a pants pocket.  My daughter has destroyed many an earbud this way so this will be the ultimate durability test.