Thanks for Aune for offering this tour to the community and @MSheney for organizing the tour.

The Aune B1s comes in a black pressboard box with the name Aune emblazoned in Silver on the top, and the name and address on the bottom. No details about what the box contains are displayed on the packaging as is typical of Chinese packaging meant for eastern markets. It certainly is not packaged in such a way to be sold in the average US based electronics store. On the inside of the box, a simple cardboard insert separates the interior into a compartment for the Amp and a 2nd smaller compartment for the cables. Cables are a heavy gauge roughly 3 foot USB to micro-USB cable, and a meager 3.5 TRS interconnect. Hiding under the cardboard are a set of rubber bands for connecting the amp to a phone or source. 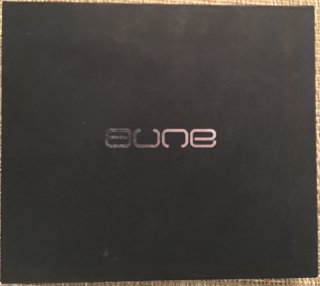 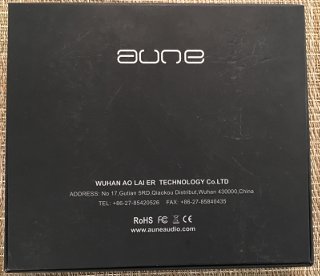 The amp itself is roughly the same size as a standard cell phone in height and width and about ¾ of an inch thick. The front face contains two parallel cutouts in the aluminum case to show some of the circuitry. This move was very deliberate to show the discrete circuity inside the amp as most of the competitors at or near this price point rely on integrated circuit op-amps rather than using a fully discrete design. Use of an IC is both a space saving and power saving measure but can be seen by some as cutting corners. The plastic used to cover the windows is slightly flexible and somewhat susceptible to scratches as a few small ones are already present on the tour unit. The remainder of the unit is solid aluminum with no screws visible at all in the construction. The rear face has two inset red synthetic leather strips that run most of the length of the player and create a good gripping surface. The left side has three sliding buttons. The power button is slightly below the middle of the unit, with the class A button next in line and the gain button nearest the top. On the right side, a single push button is used to show battery reserve. At the top of the player, a 3.5mm line in jack sits on the left, the volume knob is centered in the middle and the 3.5mm single ended headphone out jack is on the right side. One nice touch that I think is omitted on way too many products is a mark on the dial and a + and – mark on the unit to show increase/decrease of volume at a glance. At the bottom of the player is a single micro-USB charging port. 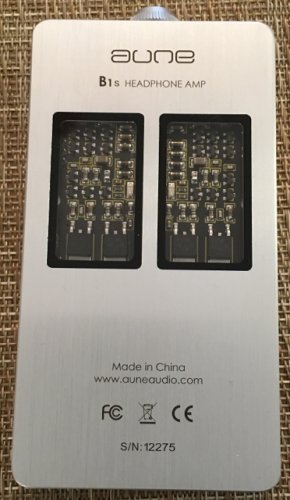 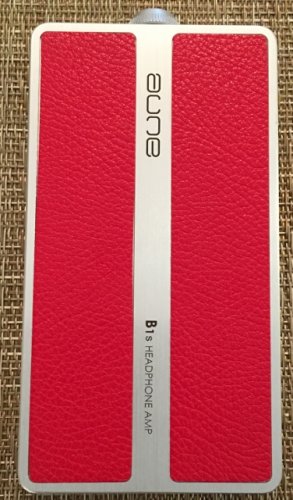 The buttons are well done. Very positive and tactile. The top and bottom form rails that partially recess the buttons on the left side while the right-hand button is flush with the surface of the player. The elephant in the room though is the Class A button on the middle left. Aune’s documentation says never to move that switch while the player is powered on or it will damage the amp and possible things attached to it. Why you would place that button between two others that do not have the same requirements and not put any safety mechanism that prevented an accidental movement is beyond comprehension. That alone takes this player out of the ranks of pocket amps for me and places it in the sits on my desk at work category, problem being they recommend not using it while charging either, which takes it back out of the sits on my desk at work category and leaves it in limbo. On the next iteration, I would recommend that Aune use a recessed style button like Fiio did for the e7 and e17 lock functions that requires the point of a pen or key to engage. 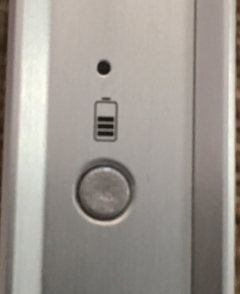 The B1s has a rare ability to fulfill both the IEM amp niche and the I want to use my 600Ohm Beyers on the plane niche. With the gain on low and the current on 10ma, the B1s has a low enough noise floor to be usable with sensitive IEMs like the Magaosi K5 that can have problems with hiss. The volume knob has a larger travel than many portable amps and gives very good granularity of control so finding a comfortable playback level is an easy task. In this respect, Aune nailed what Fiio attempted to do in redesigning the E12. Arguably Fiio did well with the E12a on that end of the spectrum but struggled on the other end where it failed to drive low sensitivity cans with any authority. The B1s gain switch alone is enough to provide power to full sized headphones. It should be noted that flipping the gain switch with iems in your ears is very likely to cause brain damage and ear drum rupture when using the B1s as the gain goes from very mild to through the roof when you flip the switch. (Ok, so maybe brain damage is a bit of an exaggeration but the gain difference is exponential). For really hard to drive stuff like the Fostex planars, the Class A switch can be flipped (with the unit turned off of course) to double the current. This allows the B1s to fully drive some really tough cans. Flipping the current switch will ½ the battery life and generate quite a bit more heat. I never felt that the unit was hot enough to be uncomfortable to hold, but the difference in heat production is noticeable.

When I first saw the specs on the B1s, I had some preconceived ideas of what it should sound like but I was conflicted. Some of what I was thinking of was typical Tube based class A amps. Warm, thick, maybe even a little syrupy, but this was a solid-state amp, so I thought maybe a bit dry and clinical. What I got when I listened to it was somewhere in between in some respects and completely unexpected in other aspects. The hard aspect of reviewing an amp is finding those things the amp brings to the table and not attributing characteristics of the rest of the chain to the amp. Clarity, detail, and speed were exactly what I had expected from a solid-state amp and were all very good. That was the easy part. Getting a firm grasp of the sound signature took a good bit longer. After listening with several different headphones, I came away with impression that the B1s is slightly bright and decidedly mid forward.

Starting with the mids since they are the focal point here, I found the upper mids to be forward of the rest of the signature. Most of the time this was only slightly noticeable, but on simple tracks with only a piano and vocal or acoustic guitar and vocal it could get mildly fatiguing. A little volume adjustment was enough to prevent fatigue, but that wouldn’t be needed if the response was entirely flat. The treble is slightly overly-energetic which leads to mild brightening of the signature. At times, this is very much welcome as it complements the typical Sennheiser house sound well, at other times not so much. On the Grado 325 that is already a bit mid heavy and bright, the B1s is enough to push it into unwelcome territory. The biggest caveat to the B1s is that pairing it with a headphone that already has forward mids is going to result in extremely forward mids. For a few, this may be exactly what they are hoping for, for most of us, this will be an unwelcome combination.

Good pairings for me were the Fostex TRP50, the Sennheiser 650 and 700, the Beyer 990, and the AKG n40. Yep, I included an IEM. On low gain, the B1s does a very good job with them and the noise floor is still jet black. On high gain, the AKG n40 would result in ear-splitting volume at anything over about 1/8 of the travel of the volume knob and a moderate hiss is present with the volume knob at zero.

Instrument separation is quite good. Soundstage leaves me a little conflicted. I really tried hard to discount this observation as a function of the sources I was using, but ultimately found that rolling through an Opus #1s, a Cayin N3, a Shanling, a Fiio, and an Essence sound card, I ended up proving what I was trying to eliminate. I found that the B1s does distort the soundstage in that the stage was wider than it was deep regardless of which source was being used. That is not the natural tendency of a couple of those sources so when I found the same effect coming from two that normally have good depth, I couldn’t ignore it. The more I traded sources, the more I noticed that regardless of source, the B1s projects a very similar soundstage. At times this is a good thing, at others, that distortion causes an unnatural positioning of instruments on the stage and can play some games with the imaging.

I find the B1s to be a very good portable amplifier that is somewhat particular about the source and headphone pairings it needs to do its best work. Darker signatures will benefit from the mid-centric nature of the B1, and choosing a source that pairs well with the B1s tendency to reshape the sound stage will help with imaging. Of my gear, I would pair the B1s to the Fiio X3 as the source as it was the least impacted by the shift in soundstage, and the Sennheiser 6xx as the mid-forward slightly bright nature of the Aune B1s complements them extremely well. In the next generation, if Aune would add a balanced input and output capability and put a mechanical lock of some sort on the current switch, I would like it even better.