Gearbest approached me about doing a review in exchange for a sample set of the Macaw Tx-80 headphones. Having had a couple other Macaw products, I eagerly agreed to review the Tx-80 as I was hoping for a GT600 with a Bluetooth cable.
https://www.gearbest.com/earbud-headphones/pp_1610587.htmlA short note about me: I am a music enthusiast, and audio hobbyist. I make no claim to have the level of experience of some. With children in college and Vet school, my budget is somewhat limited so my dabbling is rather low end. Luckily for me, now is a great time to be a frugal audio enthusiast as great equipment can be had at very reasonable prices. I tend to be quite pragmatic and I don’t expect $35 products to sound like $10,000 products so my reviews are always tempered by that viewpoint. Unboxing:

The Tx-80 arrived in a black press-board box with an outer white slipcover. The slipcover has detailed information about what is contained inside. About the only thing that might be a help in making a purchasing decision that was not on the packaging was an FR graph. 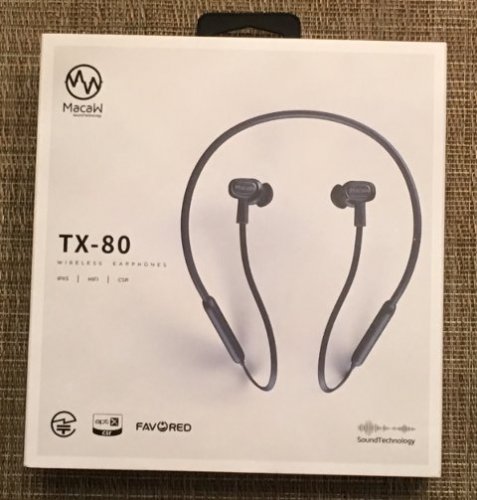 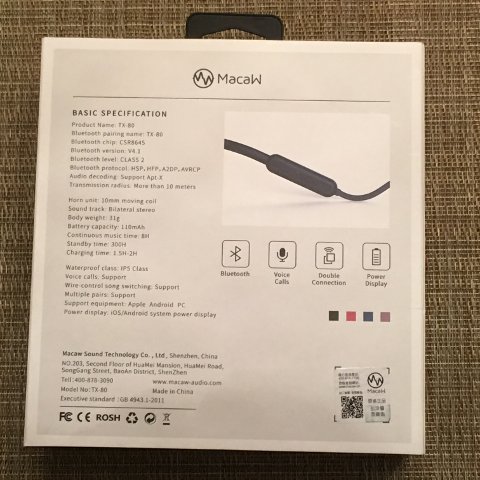 Once the slipcover is removed, the box is a book-fold design that opens right to left to expose the contents. The box is held closed by a pair of magnets that can be seen on the inside cover of the box. Inside the box, a foam tray holding the earpieces and the headband sits on top of a compartment that contains extra tips, a charging cable, a manual, extra tips, and a soft-case. The case is a tough nylon on the outside and a padded velour style interior that should do a good job of protecting the unit. 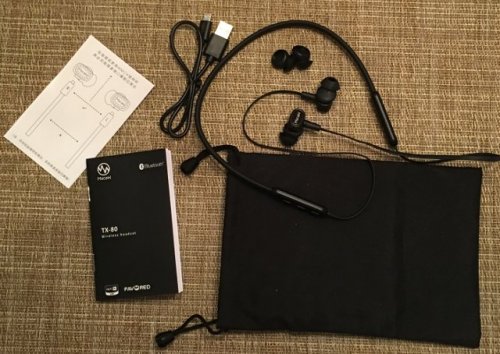 Build quality is an interesting mix and needs to be discussed in pieces. The earpieces themselves are a metal outer shell and either a hard plastic or ceramic inner. (I couldn’t find any clear documentation on this particular point). 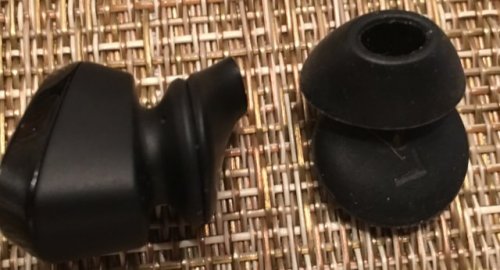 The nozzles are offset to the far front of the earpiece and are oval with the larger dimension in the vertical plane. The entire inner surface of the earpiece is covered by the tip to give the earpiece a bit more grip. This means standard tips will not fit and with only 3 sizes provided, fit may be an issue for some. At the center bottom of the earpieces are the mmcx connectors and here again another fit issue can arise. The placement of the connector enforces a fairly shallow fit as the strain relief presses against the ear when inserted more deeply. Overall, the earpieces are well made, but a couple deign issues are present. 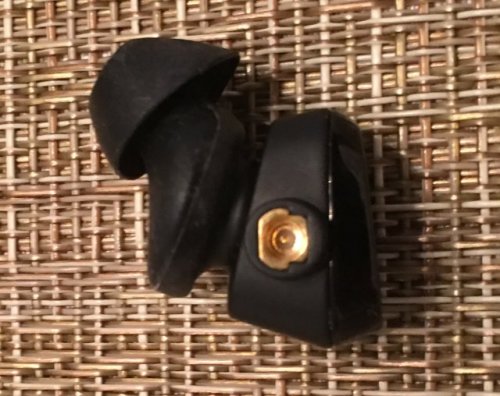 The cable is both the strongest and weakest point of the Tx-80. In function, it is the highlight, in build quality, it is probably the lowest point. Starting at the MMCX connectors, the cable is joined to the connector with no strain relief at all. 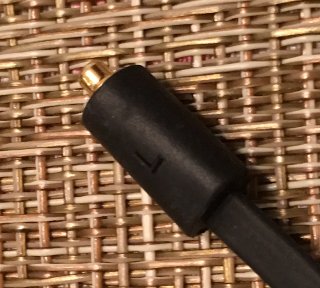 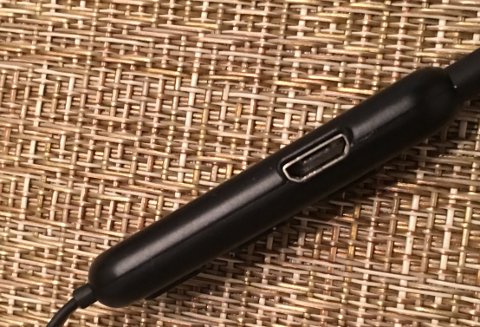 The flat ribbon cable abruptly leaves the connector and is subject to considerable strain at the junction. The flat ribbon runs roughly 8 inches to the heavier neckband section. Here again a very minimal (1.5mm) strain relief is present between the ribbon and the body of the neckband. All controls on the neckband are on the right-hand side with a typical 3 button remote on the widest portion of the neckband immediately behind the cable junction and a Micro-USB connector for charging the battery on the underside. The opposite side has a section that is matched to the controls in size and weight for balance emblazoned with the Macaw logo and nothing further. Behind those two hard plastic sections is a soft rubber flexible section that does not contain any element with a memory (wire).

These are a Bluetooth only affair as shipped since no wired cable is provided. I did try the earpieces with a wired mmcx cable just to get an idea of what they are capable of but did not find a significant difference so all sound notes are done using the Bluetooth cable. The Tx-80 uses the CSR8645 Bluetooth chip (v4.1) and supports APTX as well as HSP, A2DP, and AVRCP. I had no issues with cutouts and when paired with AptX capable devices, the Tx-80 has good range. I had no issues walking around the house or office while leaving my phone on the desk and still getting good signal reception unless multiple walls were encountered. In open space range between the source and earpiece was roughly 20 meters.

Confession time, I am an electronics nerd and have a serious battery testing setup (West Mountain Radio CBA) so I took advantage of it. The mAh claim of 1100 is on the box. My tests found closer to 900mAh at a discharge rate of less than 0.5amp. It is easily believable that at .1 Amp discharge rate that value would be higher. The tester also registered the cell as a Li-ion type with a full charge voltage of 4.2 and a fully discharged voltage (when the headphones cutoff) of 2.8V. This is fairly deep discharge in order to extend usage time and may result in the battery lasting fewer cycles than a milder discharge curve would produce. For this reason, I would recommend not running the headset until it quits. The box has a claim of 8 hour battery life which is a bit longer than I found while testing. It is possible to run them for over 6 hours so it was not unfathomable that someone got 8 hours of listening time at lower volumes or lesser ranges. I would advise recharging after any session over 4 hours which is a much more battery friendly recharge slope and should make for a good long cell life.

The microphone worked well for making and receiving calls. The placement on the inside of the right side of the band does position the mic where it rubs against a collared shirt and may produce noise if used while moving about.

Sound:
I am a lover of blues, blues/rock, classic rock, and anything with good guitar work in it. For that reason, I chose the following as my test tracks. (artist, album, track, thoughts)

Bass: The Tx-80 gave me problems as I would listen to one session and think I had my notes worked out, then I would go back and listen and it would be totally different. In some sessions, bass was exaggerated in quantity but not particularly in extension. Midbass was much more prevalent than sub-bass. Other times the bass seemed to be more refined and in better proportion. I eventually figured out that the venting on the earpieces is blocked by the tips if the tip is even very mildly shifted from the dead central location. 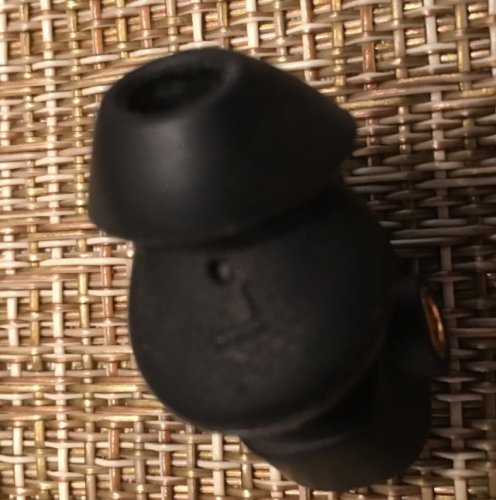 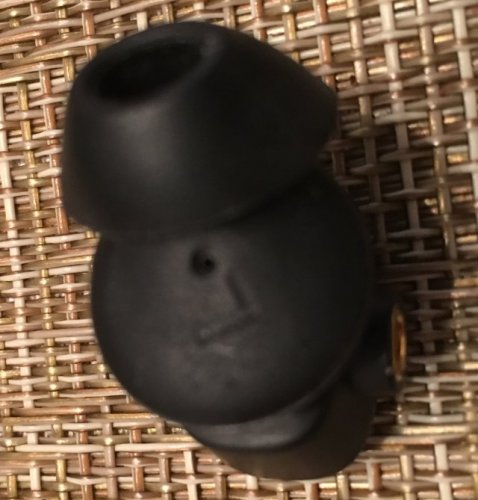 If however you wanted bigger bass, blocking the vent will certainly accomplish it. Mid-bass bleed into the mids is pronounced regardless of tip orientation. Control is somewhat sloppy and bass tends to get muddy as tracks get faster. Overall, the bass is very typical of consumer oriented V shaped products that are typically seen targeted toward teens.

Treble: Treble again is only moderately extended and somewhat polite. Sibilance was not an issue unless it was present in the track. A bit of EQ helped some to bring a bit more life to the treble but top end air and sparkle are minimal and cymbals are not particularly well rendered.

Soundstage: Somewhat claustrophobic as the closed back design and mid-bass dominance tend to hide details and spatial cues. Separation is acceptable at best and I would not recommend these for listening to large orchestral pieces or those with lots of intricate detail. Worth noting is that imaging also was somewhat inconsistent as some pieces sounded correct and others had voices behind the bass.

I am not generally a huge fan of Bluetooth headsets, but have tested quite a few lately and believe they have more utility than I had originally given them credit for. They continue to improve as AptX becomes more pervasive in both headphones and sources and will only continue to gain in market-share. The Tx-80 is (unfortunately to my ear) a very different tuning than the GT series. The single driver is tuned to a moderate V shape with minimal extension and very consumer oriented sound. If you have teens or others who are more interested in big bass and extended run time, the 6-8 hour battery life will be a calling card. For those more interested in sound quality, buy the Tx-80 anyway as It makes a good, inexpensive Bluetooth cable for your favorite mmcx connected in-ears. (It should be noted that I was able to use the cable with tip up earpieces without any issues even though it was designed for tip down use).