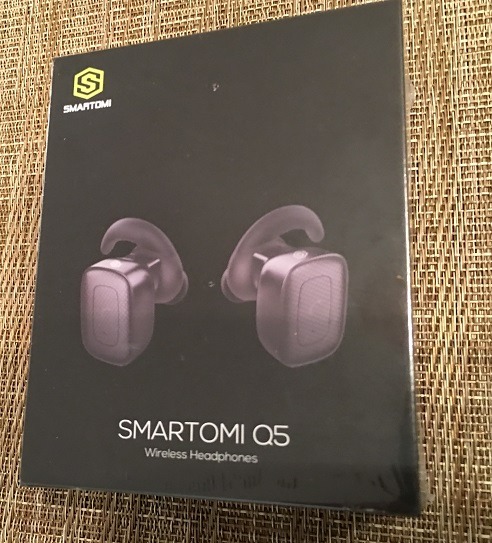 ​First off, a heart-felt thank you to SmartOmi for sending me two of their latest in ears to audition. Both pairs were sent in exchange for an honest review and I have no affiliation with SmartOmi. I always appreciate the opportunity to try new gear and the Bluetooth market has been particularly active so it seems I have a steady stream of cool stuff to try out. I am truly blessed and I thank those who continue to make this hobby exciting and new.

Having recently done a handful of reviews, I was approached by SmartOmi to review two of their new offerings. Both arrived in the same Amazon box a few days later. The outer packaging on both shares a similar color scheme and design but that is really where the similarities end. The package is very much a retail design. The front shows a picture of the earpieces along with the brand and model and that the box contains wireless headphones. The rear of the box lists stereo sound, snap paring, one-key operation, and 1year warranty. I would have preferred details of the expected battery life, frequency response etc. (As a side note pairing is misspelled and should be updated). When you lift the cardboard top, you see the buds in a plastic tray. Under the tray are the manual, and a charging cable and spare tips.

The earpieces themselves are a two-piece plastic shell with the bulk of the body being a dark copper color and the face plate in black. The design can be looked at as a box with a tube extending out the bottom right end. The box top has a single large rectangular control button with a mic hole in the left end of the button rather than being on the stationary case. The tube has the USB charging port immediately beneath the box and then the nozzle which is nearly a full centimeter wide. A soft silicone rubber combination earhook and eartip fits over the nozzle and positions the nozzle in-line with the ear canal but only the tip is in the canal. A small flap covers the USB port to prevent dust and dirt from entering but also was in an unfortunate position as the best position for me made the flap rub on my ear. I may at some point remove the flaps and see if that helps as it sticks up in order to allow a way to pull it loose from the USB port and I think they might be more comfortable without the flaps. The design is kind of hard to explain but easy to see in the pictures.

The Q5 uses Bluetooth 4.1 in low power mode so has a limitation of about 15 meters from the source. It does not support the AptX codec which would be a nice addition to future models. The vocal prompts are clear and easy to understand and pairing went quickly and easily as long as the recommended sequence is followed. Turn on left, pair, turn on right. If you pair the right first you end up with monaural sound as the left will try to pair independently rather than mate. The other thing worth noting is there is an audible signal each time a setting is changed. Fortunately, this does not include adjusting volume on the phone. Either deleting or at least lowering the volume of this tone would be appreciated as it is not adjustable via the volume control. You can have music playing at a very low volume and the alert tones are still at full volume when a phone call cuts in, which can be somewhat unsettling.

The Q5 lasted roughly 110 minutes on a charge and charged from dead in about 40 minutes using the supplied Y cable. This brings up an interesting point. The Y cable, while handy, is actually detracting from the ability to charge the earpieces. With testing equipment attached at the base of the Y and at each arm, it is clear that the current being pulled from the hub or charger is being shared by both earpieces and is effectively doubling the charging time. With the Y cable I found the draw at he micro-USB port to be .29 Amp at 5.02 V on the left side and .31 Amp also at 5.02 V for the right. When using discrete cables plugged into different ports on the same usb charger, I was able to get results of .54A and .51A respectively. The utility of the Y cable and only needing to carry a single cable to charge is nice, but if you are in a hurry to recharge my advice is use 2 cables as they are a standard micro-USB connector type. 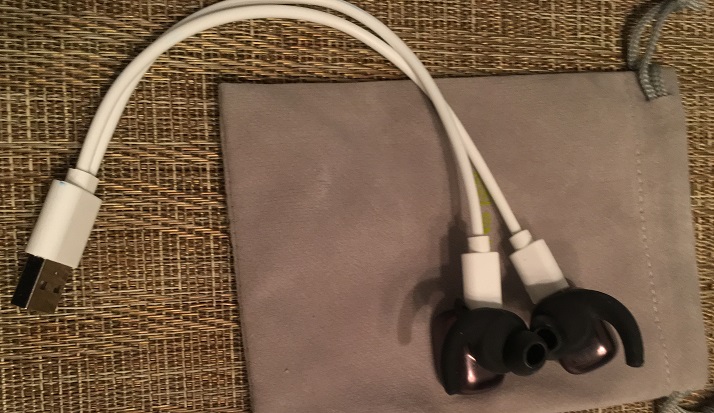 As mentioned earlier, both earpieces have a mic built in so either can be used independently as a Bluetooth earpiece when using the phone. The microphones did work as intended and the phone would let me select which earpiece the mono defaulted to when calls came in. Not sure if this is a feature of the phone the buds or a bit of both, but it was a welcome change for a leftie. 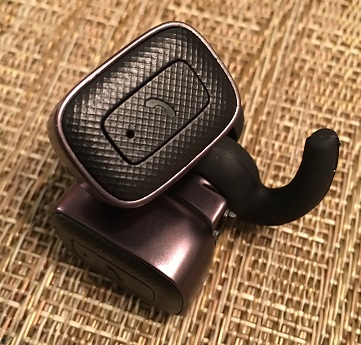 The Q5 is listed as an Premium bass sound on the SmartOmi website so I was interested to see if it could deliver that experience.

Bass: Bass is forward a bit on the Q5 as would be expected based on the advertising materials. Bass extension is not deep and sub-bass is minimal. I found pretty severe rolloff below about 100Hz. The Q5 does have a mid-bass elevation that bleeds into the lower mids a bit. It isn’t nearly as pronounced or as sloppy as the Syllable D9 so still gets points for that but its little brother the ACE is cleaner in this respect. I found the Q5 to fall into an odd space where it isn’t enough bass or sub-bass to make bassheads happy but it is a bit overly warm for someone seeking a reference signature due to the midbass.

Mids: The mids are somewhat veiled by the mid-bass bleed but carry on with the warmth found in the lower ranges. Timbre is good if instrument separation in the mids is a bit claustrophobic at times. Detail is only acceptable with its little brother again taking the lead in this respect.

Treble: Treble extension is minimal and could certainly use a bit of boost. The good side is this makes a very laid back warm signature that is non-fatiguing and can be listened to for extended periods. The bad news is that treble sparkle and air are lacking as a result.

Soundstage is cramped as is the soundstage. I found the stage to have some width but almost no depth with it being tough to tell if the piano was behind the singer or if the entire orchestra had been crammed in a mini-van to record the track. This is not uncommon. The Q5 can struggle to keep up on really busy passages like are found in blues hand me down. 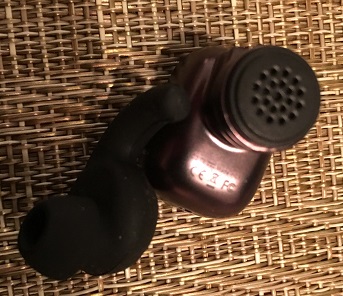 I have grown a bit jaded having recently tested a number of less than stellar products. The SmartOmi products were both a pleasant surprise. I recommended the ACE in another review and think the Q5 does take a bit of a step backwards from the ACE. This is not unexpected as the ACE is SmartOmi’s current flagship and the Q5 is one step below. There are some odd things about how the Q5 charges and fits that make it worth trying before you purchase. The sound signature is warm with a nice laid back tone and makes for a fun listen without fatiguing sibilance. They could use a bit more extension on both ends and a few minor tweaks and SmartOmi would have a real winner on their hands. As it is, they still deserve a good hard look as they are still in the top 5 I have heard in this genre and price range.