Disclaimer:  B9Scrambler kindly loaned me a few in ears that I hadn’t had the pleasure of auditioning.   I’d like to take a moment to thank him and if you haven’t checked out his blog yet, you should.

We can dispense with this section as I received them as just the earpieces and cable wrapped with a wire tie.

The earpieces are a fairly thick half moon shape with the nozzles angled at 45° out the front.  Construction is plastic and the earpieces are lighter than I expected which does bring some durability concerns.  With adequate care, they should provide years of service but if you are type to throw your in-ears in a backpack, this may be a consideration.   The Nozzles do have a pronounced lip to hold tips and a better quality grate with circular ports arranged in a circular pattern rather than using a simple piece of screen wire.  The inner surface of the shell is clearly marked R or L and has a small vent immediately below the label.  This is of particular importance as the sound is altered by blocking this vent and its position makes it susceptible to being blocked by the ear.  Faceplates are carbon fiber with the AAW and Shozy logos blended and a silver border around the edge of the plate.  The one complaint I have regarding the shells is that both of the bi-pin connectors while nicely recsessed into the shells, show gaps along one edge (and it isn’t the same edge on both).  I have tried to show that in the photos below.  Whether these gaps go all the way through and alter the sound or are just unsightly is not something I was able to investigate as these were a loan.

The Hibiki Mk2 uses a 10mm dynamic driver with a listed impedance of 18Ω and a sensitivity high enough to be easily driven by a standard phone or laptop.   The paperwork does not list whether this is the same driver used in the MkI with a slightly different tuning or if the driver itself has been upgraded since MkI but all listed specs for both models are the same so I suspect only tuning differences and not changes to the biocellulose driver are involved in the MkI vs MkII.

The cable packed with the Hibiki is the AAW Ethos and is 26gauge 4 strand copper with a 90º jack (which I prefer for portables and in ears).  The strain relief is minimal at the jack so the 90º bend helps protect it where a straight jack might be more subject to breakage at that point.   The aluminum backplate on the cable is a nice touch but couple have been amped up a bit by going to a matching carbon fiber plate.  The braid is nice and tight up to the splitter and the twisted pair above the splitter is equally well done.   The upper end of the cable has weighted earhooks that provide good strain relief and shape without the need for memory wire.  I do like the indexing of the bi-pin connectors as the cable has a groove between pins on one side and the connector on the earpiece has a matching ridge to prevent installation of the cable incorrectly.   This is a feature I would like to see more makes adopt.  Overall the cable doesn’t seem to develop much of a memory and microphonics are kept to a minimum.

The cable has a 3 button remote on the right ear side in a smoked gray translucent housing.  The order of the buttons may throw some people at first as the bottom is the start/stop with volume minus in the middle and volume plus at the top position.  All are clearly labeled, but when worn the mic is close enough to the face to make looking at the labels difficult.  Once you are used to the order, all worked as advertised with both iPhone and android phones that I tested.   The microphone is positioned well and worked well for making calls but is susceptible to noise from movement or wind.

The Shell on the Hibiki is large and sits shallowly in the ear which leaves a lot of the sides in open space.  The size will cause fit issues for smaller ears.   The forward rake of the nozzles does make fit comfortable for me as the nozzles don’t fit particularly deep but are still able to maintain a good seal.  The downside is even with a good seal, the combination of the thin material used and the large exposed surface area makes isolation less than average.

All of my listening notes are done with Auvio wide bore tips installed.

Between the MkI and MkII bass seems to have changed very little if at all.  Both had good low end extension with plenty of sub-bass rumble and a  forward mid-bass that results in a bit of extra warmth to the signature.  They have done a good job at keeping the bass in proportion to the rest of the signature so tracks that are not particularly bass heavy still come across as such, but the bass is the star of this show.  Both also suffer from the same things.  Texture is not particularly good and at times the driver can get overwhelmed by busy passages.  Blues hand me down that I use for exactly this tests starts showing a bit of congestion and gets muddy on some of the faster runs.

Mids are slightly recessed and some mid-bass bleed is evident.  Clarity remains good and detail improves as you move into the upper-mids where the bleed is less overshadowing.  Female vocals were slightly better rendered than male on most of the tracks I listened to.  Male vocals tended to be slightly thick while female timbre seemed spot on or nearly so with several of the more difficult vocals to render well.

The MkII is still treble forward, but some of the things that were most problematic about the previous rendition have been fixed.  Gone is the sometimes harsh upper treble, replaced by a well extended but well behaved upper range.  If there is a drawback to improving the behavior of the treble, it is that some detail is lost to doing so. The mids come across as more detailed than the treble as a result and at times create a somewhat odd dichotomy.   Cymbals have lost a bit of their edge and are not quite as clean as they should be.   While this creates a non-fatiguing in-ear, it wasn’t a trade off I would make as the air and sparkle are reduced when compared to others in its price class and even when compared to the MkI.

Probably the single most obvious difference for me between the MkI and the MkII is the improved soundstage on the MkII.  The MkII has a wider than average sound stage with depth at or slightly over the average and gives much more of a feeling of space than the MkI.  When listening to the Cowboy Junkies Trinity Sessions, on the MkI I felt like I was in a church, with the MkII I get more of a feeling of the Cathedral as the echoes and distance seem to come from much further away.  Imaging is good but suffers some as things get busy as previously mentioned. 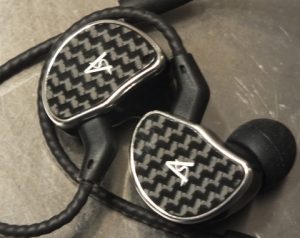 The collarboration of AAW and Shozy has now yielded two generations of the Hibiki and both have their own merits.   The MkII is making moves in the right direction in my estimation as it has addressed most of what were the largest concerns of the MkI.  AAW has provided a cable that typically wouldnt be had on an iem at this price point otherwise as well.    When judging the Hibiki MkII, I have to remember that its price point isnt $400 or even $200. It can be had for slightly over the $50 price point.   While neither MkI or MkII is my preferred signature as both are bass forward and particularly mid-bass, I still think you get an awfully competitive iem and cable combination in the Hibiki models for the asking price.  If you are looking in the Sub $100 bracket and like a V shaped signature, you should have a look at the Hibiki.