I recently purchased a couple DAPs including the Onkyo Dp-S1. This is the twin of the Pioneer XDp-30R but has a few distinct differences. This is not in the least surprising since Onkyo purchased Pioneer’s AV department in 2014. Since I bought the product from another head-fi member, I will skip the unboxing.Build:
The body of the Dp-S1 is a metal frame with a glass front that leaves about ½ cm of metal on the right side of the screen. This strip down the right hand side houses the volume wheel near the top and the hold button at the bottom edge.

On the left side, starting at the bottom we have two micro-sd card slots built into the metal frame and then the controls (reverse, play/pause, forward) are mounted in an L Shaped plastic bracket.

The top half of the L has balanced output (2.5mm), Single ended output (3.5mm), the reset port, and the power button from left to right. On my sample the power button was not perfectly aligned with the housing and could have been better fitted.

The back of the player has a simulated crinkled black leather cover over the metal framework. While not particularly good looking, the leather back does keep the player from sliding around on the dash or desk so at least it serves a purpose. 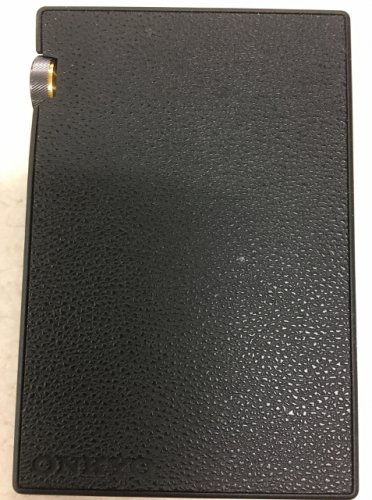 A single micro-usb port on the bottom of the player handles data transfer and charging details.

While the glass face covers the entire front of the player, the screen is only roughly ½ the height (2.4 inches) of the player as it is offset from the top a bit over 1/3 inch and the bottom leaves a full inch of unused space. The screen is also lower resolution than most today at 320×240 which gives it a dated feel as nothing as is crisp as it could be were a better display implemented. If you had an iPod in 2008, you’ll recognize the display on the Onkyo it definitely could use an update

Internals:
The DP-s1 sports 16gig of internal memory so can be used without adding a card to either of the micro-sd slots if desired. The DAC function is provided by two Sabre ES9018c2m chips with different clock sources for 44.1 and 48 kHz respectively. Amplification is provided by a pair of Sabre 9601k chips giving the DP-s1 a true balanced path all the way through the player (unlike Fiio’s latest faux pas) This gives the Dp-s1 support for up to and including 32bit/192kHz files. File types supported include DSD (up to 5.6MHz files), FLAC, ALAC, AIFF, AAC, and Mp3. MQA support is claimed on the Onkyo website but the fine print says a future firmware update will introduce it (this is disappointing as no updates have been given and the player is now a year old.)

Bluetooth support (non-AptX) and wifi (2.4 and 5gHz antennas) are both cooked in as well. Streaming is limited to Tidal, Tunein, and Deezer. Onkyo also has its own dapcontroller smartphone app (ios/android) that provides functions similar to Hibylink found on some other brands of DAP.

Battery life is good with an average of 8-9 hours of playback on a 4 hour charge.

The main menu displays the choices of Local file playback (Library), Streaming (Online), and then a set of 6 buttons to control wifi, bluetooth, settings, turn line out on or off, change modes on balanced, and adjust the EQ. At the bottom of the screen is a scroll of what is currently playing. Clicking any of these options opens additional menus. 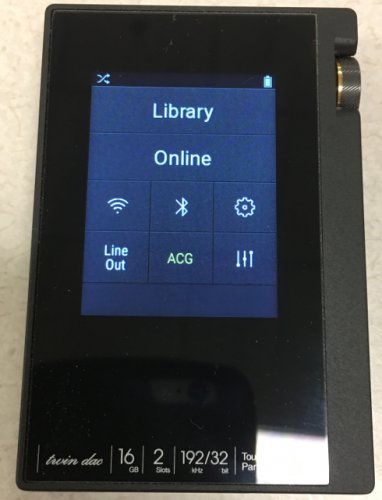 Looking first at local playback, when you open the library, you are presented with folders, playlists, artist, albums, songs, or genres to choose from. The bad news is no search function exists so you are stuck scrolling through tracks or artists to find what you are looking for. 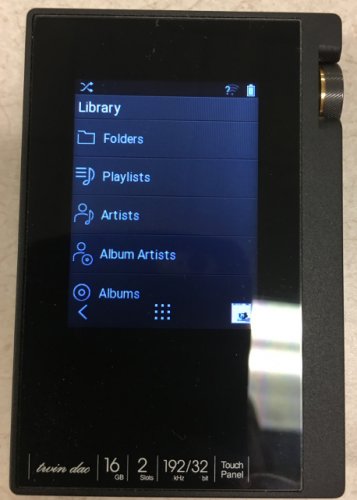 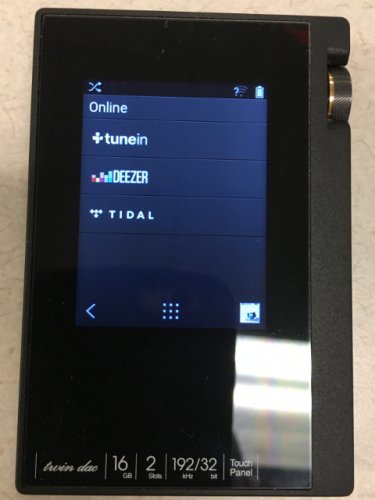 Signing in on any of these is problematic as the method of entering usernames and passwords is just plain archaic. Imagine texting with a flip phone and you have data entry on the Dp-S1. This is quite possibly the worst feature of the Dp-s1. If your wifi has any special characters in the SSID or the passphrase you can forget. I finally gave up and just connected the device to my guest network that has a simple alphanumeric passphrase as I could not find any way to get the Onkyo to produce the pipe symbol (|) or the ampersand (&).

The UI is very responsive with the exception of the loading your SD cards. While I had no trouble getting the little Onkyo to read cards as big as 256gb, anything over 32gb involved giving the player an extended period of time to load. This is not an uncommon trait but again it seems like while other players are evolving in this respect, the Onkyo is stuck with 2008 level performance. The player is also missing gapless playback which again seems like it is stuck a generation behind other players.

As a simple player for stored files, the player works well enough and some of the options are quite intuitive in contrast to some of the earlier mentioned problems. For example when a song is playing touching anywhere on the album art will pause the track. The ability to move forward or back within a song by dragging your finger left or right over the bar works better than expected, and the equalizer is easy to use. The hold function makes it easy to set the player up for in-pocket use as the screen is disabled so only the physical controls are applicable. If you’ve ever had a dap jump around between 4 different songs in 10 seconds while in a shirt pocket, you’ll certainly appreciate the hold feature. It is an odd dichotomy for certain.

It seems like a lot of the issues could be cured by firmware updates and with the promise of MQA meaning at least one new firmware version is in the works, it is my hope that they will improve some of these other aspects in the process.

Well as poor as the overall UI is, the sound on the little Onkyo is very good. Having owned the Pioneer version the XDP-30r, I can say the DP-S1 is not just a rehash of the pioneer version. The Onkyo has a bigger soundstage and is more dynamic than its Pioneer sibling. In the overall, the Onkyo is the more refined of the pair as regards sound quality. (Again odd as Pioneer has a better UI albeit not by a lot). The things that were most noticeable to me were little details like when listening to the Blasters, the singer is a bit farther in front of the piano than on the Pioneer. I also noticed that the dynamics were better on the Onkyo than the Pioneer particularly on the low end. Both players are capable of belting out the loud passages but the Onkyo does a more eloquent job of handling the quiet moments while the Pioneer seems a tad more muscular at the expense of not being as graceful.

I was able to detect a slight hiss when pairing high gain mode with my most sensitive iems (Magaosi K5) but it was less pronounced than on several other players. Moving to mid-gain removes any hint of noise and even with the volume cranked to max with nothing playing there is no audible noise.

On the other end of the spectrum, I tried and failed to use a 600 Ohm Beyer 990. The little Onkyo just doesn’t have the chops for anything over about 150 Ohm and struggles with getting all the details out of those. This isn’t surprising as it is a portable DAP designed for use with iems, but it is noteworthy for those who might want to use full-sized cans with their DAP.

The DP-s1 has a number of ways to alter the sound if you don’t like the sound as it comes out of the box. First off, the DP-s1 exposes the Sabre’s digital filter options of sharp, slow, and short delay slow. This gives you the ability to shape the sound directly at the DAC. 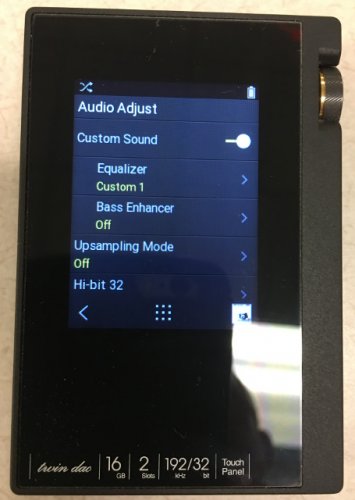 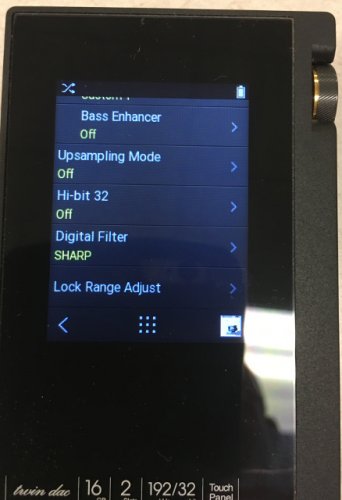 In addition to the filters, the DP-s1 has upsampling capability and Hi-bit 32 to re-quantitize 16 and 24 bit tracks to 32 bit. According to Onkyo, this smooths out some rough spots in 16 bit tracks. (I wasn’t able to tell a difference during listening with this feature on or off). Others may be able to discern the differences but to my ear they were so small as to question if I was hearing a difference or hoping for one.

A 10 band graphic EQ gives you fine tooth control of the sound and a 6 level bass boost gives even more choices. I found that even the most ardent bass head would likely be happy with a level of 4. Anything beyond that muddied the sound so thoroughly as to be unusable. At levels 4 and below, the bass boost did a good job of lifting frequencies below 200Hz although personal preference would have been for a lift below 100Hz and for that reason I left it turned off during most listening sessions. 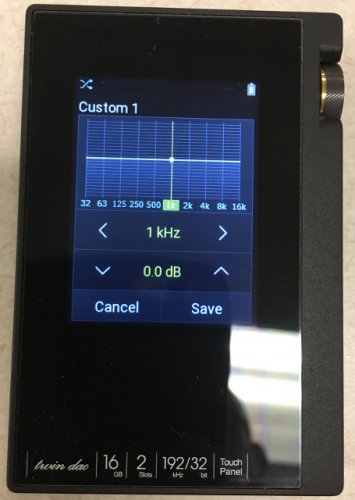 The Tunein radio and Tidal both worked exactly as expected and the only major downside is that without using the Tidal’s Android or IOS app, none of the players have the ability to use Tidal offline. This is more a limitation of Tidal itself, but is annoying for those used to using it on other devices.

The Onkyo Dp-s1 is a Jekyll and Hyde proposition. Sound wise, the little player is easily amongst the best I have heard and can compete with the likes of the Shanling M2s and the Cayin N3. UI wise, the DP-s1 is more in the class with Benjie, AGPtek, and Zishan. It is about as polished a sound as it is unpolished an app. If you want a DAP to play songs from a playlist or randomly while at work, you could enjoy the DP-s1 for its basic functionality and sound quality but if you wish to do lots of searches to pick songs or really utilize streaming sources, the UI makes it very tough. Seven years ago, this would have been a top of the line product, but in 2018 it simply is outclassed by products that retail for a good bit less. Onkyo needs to redesign the UI to match the sound for their next player.