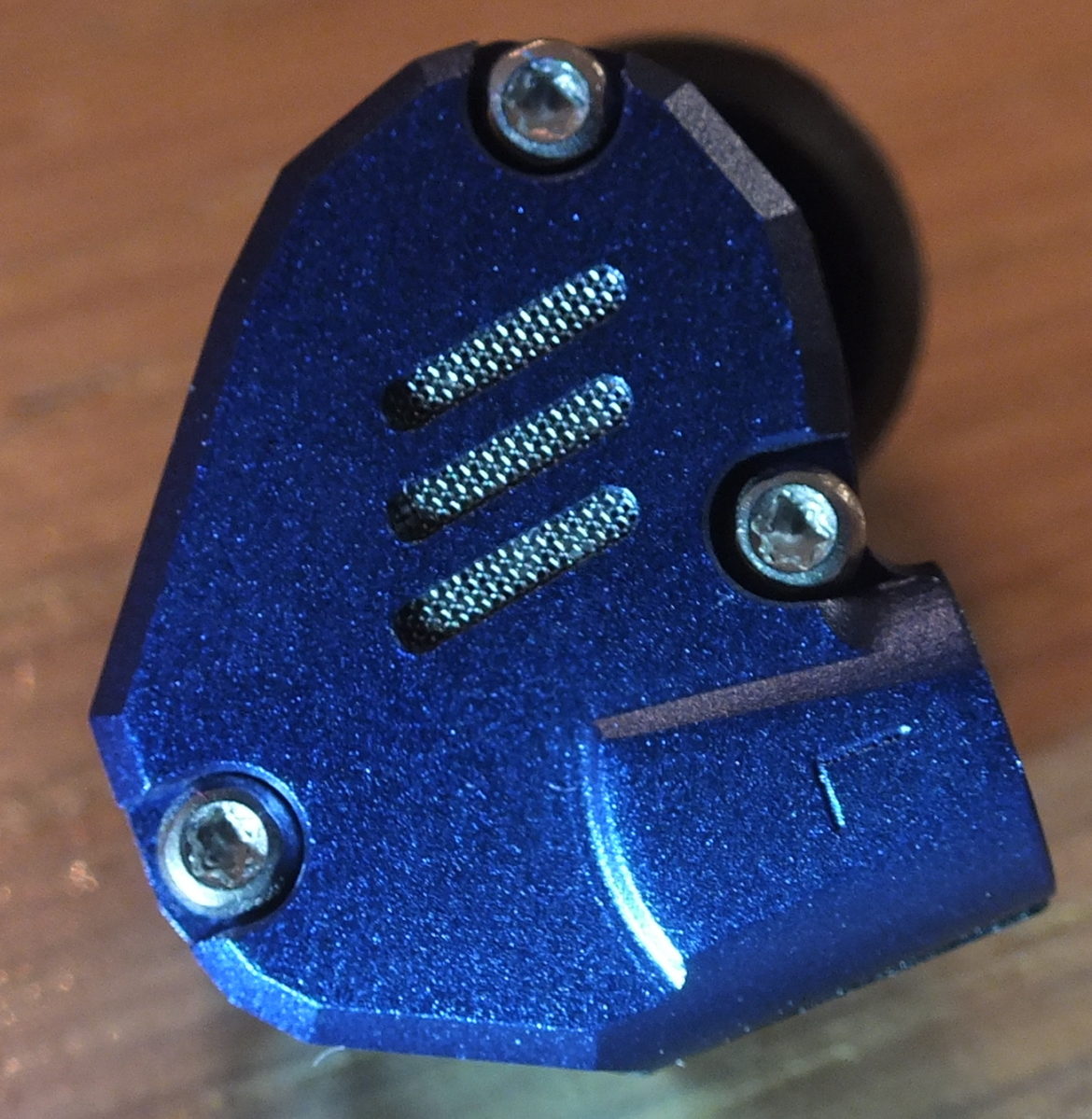 I was sent the KZ Zs7 by Kinboofi via their Amazon Shop for review.   Kinboofi has recently started to sell most of their product line through Amazon giving those of us that live in the US a faster shipping option since most are available with Prime!.  From the time I discussed reviewing the Zs7 to arrival was a mere four days.   This may present a good option for our Canadian neighbors as well.

KZ has upgraded their packaging for their flagships of late and the Zs7 is no exception.  Gone is the white box with the line drawing of the iem, replaced with a book-fold design.  The outside of the box is flat black with a gloss KZ logo.  When opened a foam tray houses the earpieces (which have mid sized tips pre-installed) and a small KZ plaque that annouces the Zs7 and its 10 driver hybrid design.   A small tab at the bottom of the foam makes it easy to life out the tray and reveal the tips (S and L Silicone tips), manual, warrantee card, and cable hiding beneath.   The cable is also of the new design and is a significant upgrade from their earlier designs.

Those familiar with the Zs6 can skip this part of the discussion as the Zs7 uses the same shell.  The only difference that I could find is the vents cut in the faceplate which are vertical on the Zs6 and angled on the Zs7.  This change may give the Zs7 slightly larger vents but this is a hard thing to measure accurately and visually, if they are larger, it is only minimally so.    The pinhole vent on the inside is the same size and in the same position as that of the Zs6 so the inside shell appears to be exactly the same as the 6.   The good news is the 7 does have a lip on the nozzle as had previously been omitted so that was a nice touch.      The bad news is the shell is not perfectly aligned as can be seen in the photo below of the bi-pin connector.  This doesn’t effect performance, but is a bit unsightly.

The Zs7 is a 5 driver per side design with an electronic crossover.   A single dynamic driver handling sub-bass responsibilities and 4 Balanced Armatures handling everything above the basement.   Nominal Impedance is listed as 24Ω with a sensitivity of 105dB/mW.   This makes the Zs7 easy enough to drive with a cell phone, but it definitely opens up more with more potent sources.  I took one faceplate off to try and see more details of the crossover but was unable to do so due to it being hidden under other parts.

The cable shipped with the Zs7 is the upgrade cable KZ has been selling of late.  Gold plated .75mm pins at the upper end, followed by earhooks with a memory wire.  a two wire twist pattern down to the splitter followed by a four wire braid down to the 90º 3.5mm jack.   If there is a drawback to the cable it is the position of the splitter which is too low on the cable and no chin slider is provided above it.   My model does not have a microphone or remote but both are available should you so choose.

All notes were collected using the large starline tips provided with the Zs7.

Sub-bass is very present but well controlled and gives the Zs7 a very visceral feeling when called upon to do so.  Sub-bass is well extended with rolloff not being pronounced until well into the lower 30Hz range.  Mid-bass is mildly elevated but well controlled with good attack and decay and very little bleed into the mids.  Here the trade of the Zs6’s mid-bass dynamic for a balanced Armature seems to have really improved an already good bass.  The Zs6 had good extension and bass quantity but suffered from significant bleed.   The Zs7 improves the bass timbre and sounds more natural than the previous generations and is the best bass presentation of anything KZ has made and I find it on par with or better than many iems costing signifcantly more.

Mids were good on the Zs6 but were overshadowed by both the mid-bass and the treble.  The Zs7 shares those mids but does away with the bass bleed that obscured some of the lower mid detail and the overly exuberant treble of the Zs6 to really allow the details to shine through.    The mids are slightly behind the mid-bass but with as much presence and detail as it present, it is hard to refer to them as recessed.   Upper mids are pushed forward and give vocals a bit of extra push and bring them to the front so the Zs7 feels like sitting in the first couple rows of the show.

The lower treble plateaus from the upper mid push and unlike a lot of other IEMs in its class does not continue to climb.   This makes for a much more polite treble than the previous generations.  Gone are the big spikes replaced with a mild lower treble elevation and an open and airy top end with a roll-off above about 14kHz.   Cymbals are well rendered and don’t sound tinny like the Zs6 can.

Soundstage is good and seems to be slightly wider than deep but fairly large in both dimensions with a good sense of height.  Instrument separation is extremely good with no sense of crowding as tracks get faster and busier.    Layering performance is better than expected and easily on par with models costing considerably more.  To me the Zs7 is in the class with the Flc8s and b400 in layering and imaging if not the same overall signature.    Placement on stage is good with most instruments being easy to identify and place even during busy passages.

Lets face it, this is the comparison everyone wants to see.   The arguably three best Kz’s to date head-to-head.    And realistically this graph tells most of the story.    These three were all run using the Umik-1 with a silicone adapter, standard starline large tips, REW 5.2 beta 4, Creative CTX sound card, and the standard KZ cable from the Zs7.   No settings were touched between runs so differences in amplitude are strictly the result of the earphone and not of adjustments.

Starting at the bottom end, the Zs7 shows a bit less roll-off than the previous generations.  All show a bit of a V shape with a slightly larger dip in the mids when compared to sub-bass peak in the Zs7 when compared to previous generations.  From there, all three iems are very similar until they reach 7kHz where they take very different paths.  The Zs7 has a mild and wide plateau from 8 to 11 Khz while the Zs6 and Zs5v1 both exhibit the rather prominent 11kHz spike that has dominated the signature and the conversation about these two models since their release.

I chose the BQ3 to compare against as the two are more similar than not in signature.  The Zs7 rolls-off lower at the bottom end than the BQ3 and has a bit more visceral feeling to the low end so will please those looking for more thump than the BQ3 can bring.   Both have similar shape to the mids with the Zs7 showing a bit better detail retrieval and not quite as much push of the upper mids forward.   Treble is where the two diverge the most in that the Zs7 plateaus where the BQ3 continues to rise giving the BQ3 a bit more treble presence but at the cost of sometimes being a bit more strident.   Both have similar size stages while the Zs7 to my ear has a bit more height.   Imaging and layering both favor the Zs7 although the BQ3 is only marginally different in imaging.  Layering is considerably better on the Zs7 with particularly fast tracks and for fans of death metal this will be a plus where the BQ3 can sometimes feel a bit congested.

The sub-bass is a bit better extended on the Zs7 while the mid-bass is a bit more emphasized by the M6.  (Note, I am referencing the green filter and not going into all the possible tunings of the m6 here.)    Texture of the bass is a bit better on the Zs7 while speed is about even between the two.   Mids still go the the M6 as it has a bit better timbre and is slightly more natural sounding to my ear, but not by a large margin.   Treble goes to the Zs7 which brings adequate sparkle without being strident or over-stated as the M6 is by default.  Again the M6 offers tuning options that the Zs7 does not, but the downside to the M6 is it needs them to be as good a signature as the Zs7 manages straight out of the box.

Sub-bass is better and mid-bass is slightly less emphasized on the Zs7 compared to the AS10.  Both share the same nicely textured mid-bass but the Zs7 is capable of digging a bit deeper than the AS10 at the low end.    Mids have improved on the Zs7 as well with more detail than was present on the AS10 and a bit less recessed.   Treble, is a mixed bag.  For those that like a bit of extra treble energy, the AS10 has a bit more going on than the Zs7.  For those that want for something a bit less strident, the Zs7 will get the call.

I have to say that either KZ really listened to the feedback from the Zs5 and Zs6 when designing the Zs7 or this is the happiest accident for KZ yet.   I chose to think it is the former and that KZ is making headway in improving their IEMs as we have seen several recently (As10, As06) that follow this trend.   To my ear, the Zs7 is the best KZ yet and makes a statement that the budget king now firmly competes in the $50 market.   There is a lot to love about the Zs7.  For those that like the Zs6, all the best things about the 6 are still there.  For those that found the Zs6 piercing or harsh, the Zs7 refines the treble so it is not in the same category.   To top it off, detail retrieval is the best yet for KZ.    If you think I like the Zs7, you’d be right.  I’ve already placed an order for another pair at my cost this time since I have a policy of not keeping free samples.  (They all go to high school band students, or hospital patients so somebody gets good use out of them and I can honestly say I don’t have a financial interest in the review.)