Disclaimer:  I purchased the KZ Zs10 Pro from MissAudio for a reduced price for review.  If you are interested in purchasing the Zs10 Pro,  it can be found in their Ali store here.

The Zs10 Pro comes in the standard KZ white slip cover box with internals being hidden under the foam tray with the earpieces.   To those familiar with KZ, this is actually a bit of a departure as the AS6/AS10/BA10/ZS7 has all shipped with a more upscale packaging that indicated they were in the flagship line.  Either KZ has reverted to using the standard packaging for all models or this is an indication that KZ does not see the Zs10 pro as a flagship.  Either way,  the kit will be familiar to anyone with a KZ.  Cable, earpieces, and 3 sizes of star-line tips round out the package.

The Shell on the Zs10 pro has more in common with the ZsN than the original Zs10 which is a big improvement in my estimation.  Fit of the original was clunky at best and for many with smaller ears it was just plain too large.  The Pro is roughly 2/3 the size of the original with a better shape to boot.   Outer shells are polished metal with three small vents. Inner shells are transparent plastic in various colors with two vents on the inner surface. One vent is directly over the dynamic driver and the other to the rear of it.  The nozzle matches the faceplate in color and material and has a sizable lip for holding tips in place.  Nozzles have a forward and upward rake as they exit the lead edge of the shell.  The bi-pin connector is of the newer hooded semi-proprietary design.  This design seems to be becoming more popular and does help make the connection more stable so I hope it will eventually catch on universally so cable availability will be improved.

Internally, the geometry has to have changed, but the drivers are listed as the same or possibly improved versions of the same.  Lows are handled by a 10mm dynamic driver that is listed as a “Second Generation Tesla double Magnetic dynamic unit” with a 1 Tesla field strength.  Based on that description,  I would guess an improved version of the driver used in the original ZS10.   Mids are handled by two 50060 balanced armatures and highs are handled by a pair of 30095 balanced armature drivers.    A crossover is shown in the exploded diagram of the Zs10 pro, but no additional detail is given regarding it.   The KZ official site lists nominal impedance as 30Ω while most of the other ali sites have it listed as 24Ω.   Realistically the difference in 24 and 30 is probably only important for higher impedance sources.   Sensitivity is  listed as 111dB/mW and the Zs10 Pro is easy to drive from a cellphone or tablet and doesn’t need additional amplification.

If you’ve read any of my recent KZ reviews, you already know what I am going to say about this cable.  Its a mixed bag at best and a few small changes could dramatically improve it if KZ wanted to.  The fact that a year on no such changes are taking place makes me question how much KZ is paying attention to customers as I have heard the same complaints echoed nearly universally.  The cable is a 4 strand braid below the splitter and twisted pair above it.  The splitter itself is way too low on the cable and no chin-slider is provided.  This makes the cable entirely more tangle prone than it should be and would be easily cured by moving the splitter about 8 inches further up the cable toward the earpieces.   The Jack is the standard 3.5mm TRS 90º connector standard on all KZ cables these days.  The other end of the cable sports pre-formed earhooks with clear hooded bi-pin connectors.   My sample does not have the mic, but that option exists for those who prefer one. 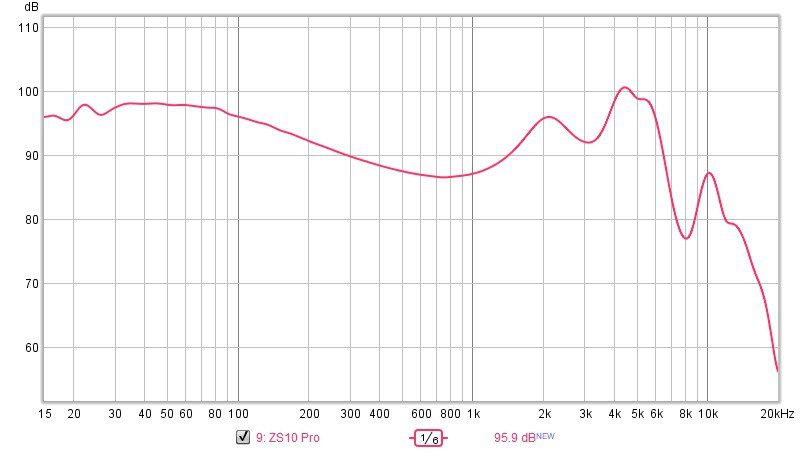 Sub-bass is emphasized and rumble is good albeit slightly slow on the decay. Mid-bass drops throughout the range as it moves toward the mids with the lowest point being the transition point.  The upside to this tuning is that no mid-bass bloom is present, and the typical mid-bass bleed that often brings warmth but obscures detail is nowhere to be found.   The downside is that the transition between the dynamic driver and 50060 armatures is not particularly smooth and at times is evident when listening.

Mids start out recessed but then climb and while male vocals can sometimes sound a bit behind their female counterparts, both have good weight and tone.  I found the mids better than expected in both quantity and texture.   Transition between upper-mids and lower treble is much more fluid than the lower transition point and provides that little extra push to the female vocals I mentioned.   Guitar timbre is good with electric sounding more realistic than acoustic or strings.   Violin sounds a touch dry to my ear and a little extra warmth here would make the presentation a bit more convincing.

Treble on the Zs10 pro can be best described as polite and non-aggresive.  Lower treble has good energy but rolls off fairly early and limits overall air at the top end.  Some energy is re-introduced between 10kHz and 11kHz but it simply isnt enough to really open up the sound.   To me this lack of top-end limited the realism of both snare attack and cymbals as neither had the energy to sound natural.   The upside is that even tracks with a bit of harshness recorded in are somewhat smoothed out by the reproduction of the Zs10Pro.   For the treble shy, these may be the best KZ to date as none of the jagged points in the 6-9kHz range that KZ is so known for are present in the Zs10pro, if anything it could use a bit more energy in that area and this is coming from someone with a sensitivity to the 9kHz range spikes.

Soundstge of the Zs10 pro is wider than deep but does have reasonable depth and some height to it.  Seating the orchestra is fairly easy as instrument separation and clarity is above average for iems at this price point.  Imaging is usually good, but occasionally gets hampered by phase issues between the BA and dynamic driver and can show a few odd placements as a result.  Layering is good with no tendency to get overly crowded even on tracks like “Blues hand me down” that I use to intentionally try and induce mud.

Build wise the Pro has it all over the original, it is smaller, more comfortable, and better looking.  Whats not to like.

Sound wise it is a closer match as both have some of the same issues, but it is a matter of degree and the Zs10 pro does improve on the original in bass speed, depth, and quality and in treble tuning.  I’d still like to see the mids improved a bit more on both, but the Zs10 pro is certainly a step forward.

The Zs7 wins for shell quality, but loses for comfort as I found the Zs10Pro easier to wear for extended for periods.

Sound wise, these two are nearly twins with the Zs7 exhibiting a bit better low end extension but a bit earlier treble roll-off than the Zs10Pro.  The one thing that might tilt the tables in favor of the Zs7 is imaging.  I mentioned the coherency issues on the Zs10 pro and when playing the same track on both to compare the Zs7 was notably better at spatial representation.   For rock and popular genres this is not so much an issue but for larger orchestration or quardaphonic recordings, the Zs7 may be a better option. 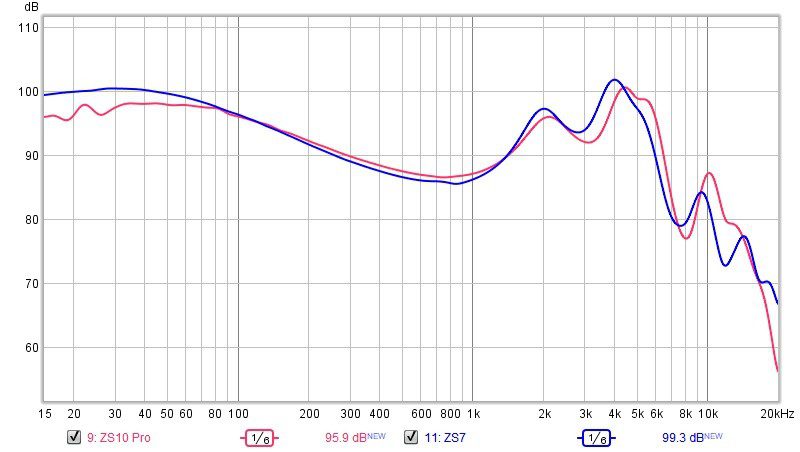 I threw this one in there just to see how far KZ has come in a fairly short time.

Build is more comfortable on the Zs10pro and it is easier to drive as well when compared to the Zsr.

Sound is similar, but the Zsr is a bit darker and warmer while the Zs10pro maintains a bit better balance in the overall.  Detail is also better on the Pro in comparison to a couple years ago’s flagship.

The KZ Zs10 pro is honestly a good step forward from the original Zs10.  Fit is considerably better as size has decreased a good bit and shape follows the natural shape of the ear a bit better.  Sound while similar is improved in several areas.  Bass quality is improved, mids are less recessed and more detailed, and treble is more detailed than their predecessor.  KZ is steadily outgrowing its early reputation for producing big Vs with lots of extra treble energy and little else.   The Zs10 Pro represents very solid value for a 5 driver hybrid and while it isn’t going to dethrone the big boys just yet, it is certainly movement in that direction.    Those who like the Zs7 will find the Zs10 pro to be similar in sound quality with slightly better mids and more extended treble and a better fit.    Seeing as I thought the Zs7 represented excellent value and the Zs10 pro improves on it in most regards, it would be hard not to recommend it.