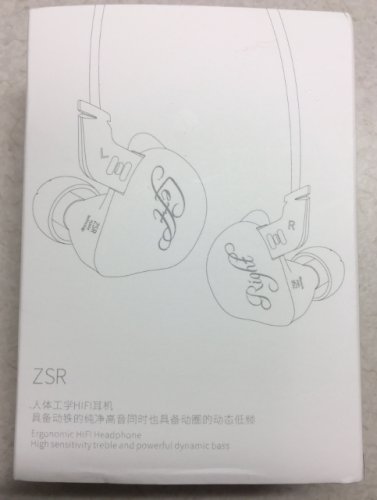 First off, a heart-felt thank you to George and Gearbest for providing these headphones. New gear is always fun and the opportunity to try out gear as it comes to market is indeed a privilege. LINK HERE           A short note about me: I am a music enthusiast, and audio hobbyist. I make no claim to have the level of experience of some here. I tend to be quite pragmatic and value oriented.. I am a lover of blues, jazz, and rock music and listen to a very broad range as I am always interested in what is new.Review:The Kz Zsr arrived in the typical KZ white box with the graphics on the sleeve. Inside is the a clear plastic top with a Black plastic tray holding the earpieces.
​ 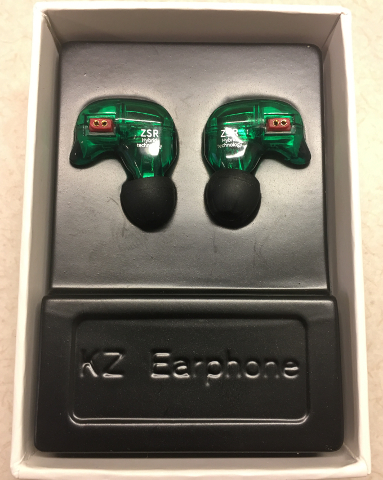 Under the tray you will find the manual, extra tips (SML), and the cable. This pair shipped with a cable with microphone and remote. An option for omitting those is also available. The kit is a bit Spartan as it has minimal tips, no shirt clip or carrying case. The focus is very much on the earpieces themselves as the cable is little more than an afterthought as is typical of Kz products.

For those who have not purchased a previous KZ Zs series product, the cable is a bi-pin design with a 45 degree L at the earpiece connector. They do have a memory wire encased in a black plastic strain relief for the first 3 inches below the earpiece which gives way to a length of cable coated in soft rubber with a hard rubber splitter at the Y. No chin slider is provided and single button remote/ microphone is on the right cable about 9 inches below the ear piece curl. At the opposite end, a TRRS arrangement 3.5mm jack with a 90 degree L shape terminates the cable. The cables are usable, but generally spending the $8 to get an upgraded cable makes for better microphonics and perhaps a bit better longevity. I usually replace the cable to be rid of the memory wire but others have simply cut the stock cable to remove the memory wires. 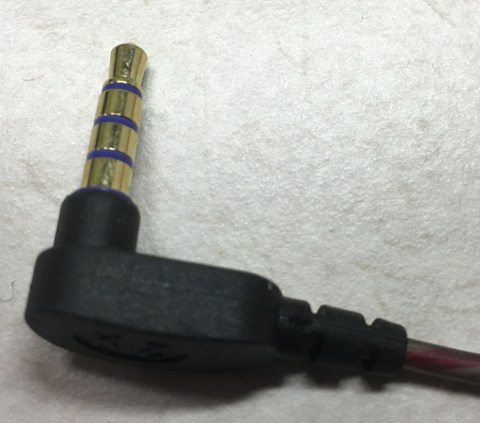 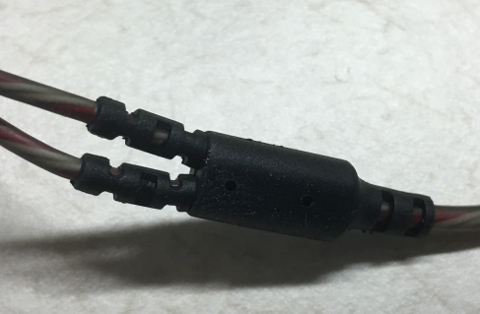 The earpieces themselves are a transparent green plastic in an ergonomic design based on modeling several hundred ears according to Kz. For me, fit was good, but not perfect and isolation was only average as a result. The nozzle have almost no rake and thus sit perpendicular to the body of the iem. The nozzles due have a slight lip to aid in tip retention and use standard size 5mm tips. The bi-pin female connector is recessed into the body and allows the cable to seat solidly. This is basically the same arrangement as is seen on the earlier Zst model. Inside the earpiece one can see two BA drivers in the nozzle itself and a 10mm Dynamic mounted inline with the nozzle in the main body of the iem. The wires from the bi-pin can be traced to the back of the dynamic and around the side of it but I was unable to see exactly how they connect to the BA as that was obstructed by the dynamic. 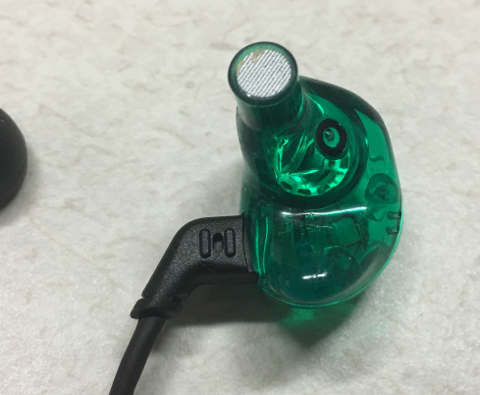 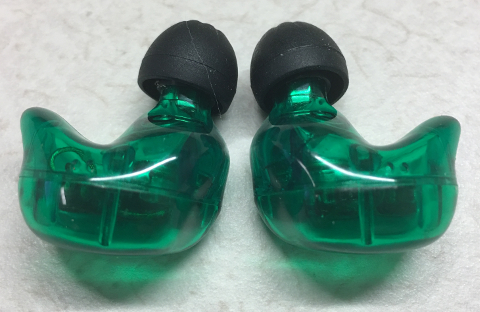 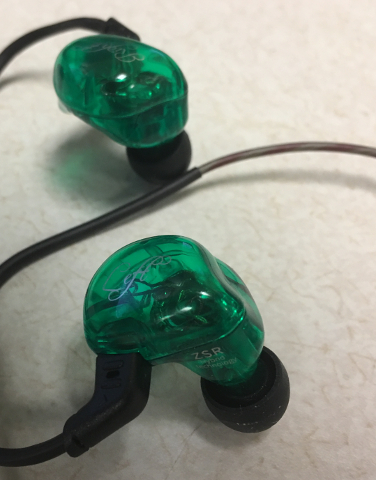 The remote sits on the right cable about 9 inches below the earpiece and properly positioned the mic to be at mouth level for me. Due to its design the mic is still susceptible to noise from movement or wind. The remote is very minimalistic but did work to answer calls or pause music when used in combination with an I-phone or Android (7 and HTC m9 respectively) as well as the Cayin N3 DAP. 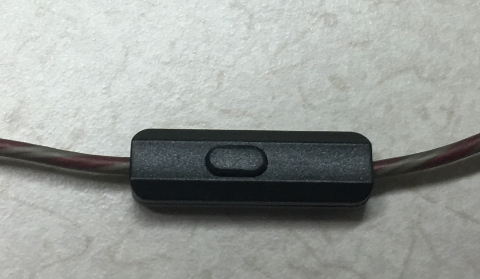 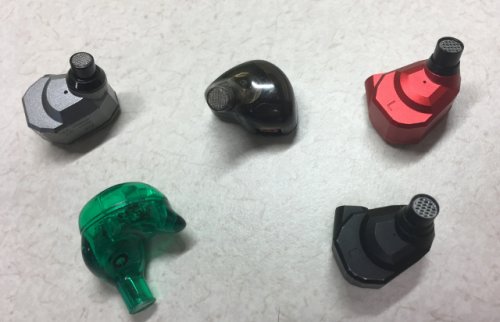 Bass: The bass on the Zsr is the focal point. The Zsr has good bass extension and good sub-bass. Mid-bass does have substantial emphasis and does produce bleed into the mids. Compared with other models in the KZ line, the Zsr is most similar to either the Zs3 or Es3. It has more sub-bass and bigger bass presence than the Zs5 or Zs6 at the expense of being a bit looser and a bit more bass bleed into the mids. For those that want a subwoofer in your iem, the Zsr does a good job of it.

Mids: Mids do suffer from bass bleed but are more present than the Zst or Zs3. When compared to the Zs5 or Zs6 the mids are a touch more recessed particularly on the upper end of the range as you reach the treble. Bass light tracks do a good job of exposing the lower mids, which are slightly forward and generally well rendered. The lack of upper mids can make vocals seem a bit thin.

Treble: The classic Kz treble spike is still present in the 7kHz range but is not as prominent as it is on the Zs5 and Zs6. When compared with the Zst, the spike is of similar size but starts at a lower frequency on the Zsr than on the Zst. To my ear the Zsr is in the 7kHz range while the Zst centers closer to 9kHz. Compared to the Zs6 the spike of the Zsr is about 4db below the Zs6 or roughly about ½ the size of the Zs6. The great news is that extra bit of treble energy gives the Zsr good sparkle and some top end air even without having great extension..

Soundstage is larger than expected in a design with as little venting as the Zsr has and instrument separation is reasonably good but can suffer in the upper mids due to the previously mentioned thinning. Imaging is a bit odd as sometimes it seems to be spot on and others things kind of wander around the stage.

The Zsr is very much what one would expect when you look at the sum of its parts. It has the bass of the Zs3 or Es3 combined with the the mids of the Zs6 and the treble of somewhere between the Zs5 and Zst. The Zsr retains the house sound most Kz listeners will be familiar with (A big deep V tuning). The Zsr does show some evolution in that mids are better than the Zst or Zs3 and the treble spike that was so prominent in the Zs5 and Zs6 while still present is roughly ½ the level of the previous generation. If you were in love with one of the previous generations, you may find the Zsr to be a bit of a let down. If you liked the previous generations but wished they would alter the sound signature to bring the mids forward and the treble spike down a bit, you may really enjoy the Zsr as that is exactly what Kz has done. Now for that next generation, push the upper mids forward to match the lower mids and reduce that treble spike by ½ again and you might just have the best earphone ever made for $30.