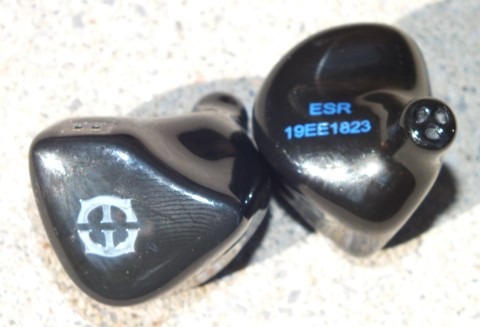 First off, a heartfelt thank you to Devon and the Empire Ears crew for entrusting me with both the Bravado and the ESR as part of the review tour.   I have thoroughly enjoyed my time with both and look forward to trying additional members of the new product lines.

With the Kit and shell of the ESR and the Bravado being the same, if you have read my Bravado review, you can skip to the sound notes as the other sections are going to be extremely similar.

The outer package is a side opening pressboard box done in flat black with a silver Empire Ears logo on the top and the Name emblazoned on the flap. While not particularly obnoxious, I will say that Empire missed no opportunity to brand absolutely everything in the package. Inside the box is first a cardstock quick start guide again emblazoned with the large wings. Under that a large black drawstring cloth bag also with large silver logo. Under that, the hard case. The hard case has an aluminum inset in the lid with the logo, branding, and model designation written in black. The interior of the hard case is well thought out with protective compartments for each earpiece and a larger compartment for storing the cable and a small compartment for the cleaning tool at the end opposite the earpiece compartments. Under the hard case is a smaller cloth bag and a set of cleaning clothes. (Also in matching black).   Honestly, if each piece was seen independently, the branding is tasteful and not overstated. When taken in all at once during the unboxing process, it can get a bit overwhelming as the cleaning tool was the only component that I did not find an Empire logo or branding on.

As previously mentioned, the package comes with a good assortment of bags, boxes, and wipes, but the tips, cable accessories etc… were all shipped separately. This may be a tour thing or it may be that with the arrival of two sets of IEMS that the shared items were not duplicated so were sent outside the packages.   Accessories include the previously mentioned hard case, large cloth bag (that the hard case fits in) small cloth bag, cleaning wipes, and tip cleaner, in addition to Final Audio Type E tips, an Effect Audio 4.4 to 2.5 Balanced adapter, a 2.5mm balanced to 3.5 Single ended adapter, and a package of alcohol cleansing wipes. A cardstock page with details of the ESR and Bravado was provided as well and since both models are included, I would assume that item was specifically for the tour and not a standard item shipped with retail purchases.

Overall the kit is fairly complete although a couple additional tip options (Comply, spin-fits) would be welcomed as none of the provided tips was perfect fit for my ears. (more later).

The IEMs themselves are a deep gloss black with a subtle Empire logo hon the faceplate and the model and serial number written on the under-side of the earpiece. Build quality is fantastic as seams are blended so well as to be difficult to detect without magnification.   The bi-pin connector is so well fitted that were the color not slightly different it would effectively look like it was one solid part.   Had I not previously been told the shell was a high impact plastic, I would have thought they were made of ceramic as the polish is that good and the seams that invisible. Overall, a masterful job. The only difference in the ESR and bravado in the shells is the number of ports in the nozzle as the Bravado sports 2 ports while the ESR has 3.

Both models were supplied with Effect Audio cables which have a sterling reputation for performance at with a retail of $150 for the cable alone, they should indeed perform well.   The cable itself is thicker than some but still very pliable and microphonics were kept to a minimum as the earhooks on the cables were effective in preventing cable weight from transferring to the earpieces themselves.   My complaints with the cables center around two items. First, nowhere on the length of either cable exists any strain relief. Not at the jack, the splitter, or the earpieces.   For a cable in this price range, I expected that they be designed in a way assure longevity.   I am probably harder on my iems than some as I wear them almost constantly during the work day and if purchasing the Bravado or ESR for my personal collection I would purchase a different cable that I feel offers better longevity.

The Second issue is the adaptors. Quite simply, they do not work well and should be avoided. I had numerous cut-outs while using either of the adapters and slightly twisting the connector in the adaptor would cause the channel to come back but at the expense of clicks or pops in the sound while moving the connector.   If you need two different cables for use with different DAPs or amplifiers, I would strongly suggest you forego the adaptors and buy additional cables. I used a Norne Audio 3.5 Single Ended to bi-pin cable to do my single ended testing once I realized the adaptor could not be made usable.

The earpiece is on the large side but is deceptive in that it weighs very little. They sat in my ear without trouble and the earhook on the cable makes them fell weightless.   Isolation is only average as the bulk of the earpiece sits well behind the ear canal.   I did have some trouble finding a set of tips that both fit my ear and were comfortable. The large tips were too large to wear comfortably for extended periods while the mediums were just small enough to lose seal when I moved. The nozzles are standard sized so a quick search of my tips yielded several pairs that worked and I ended up settling on comply foams as they offered the best combination of comfort and seal. They likely tamed the treble just a bit but in testing with large spin-fits, I found that my observations held consistent so I do not think tip rolling dramatically influenced my listening experience.

Bass:    The ESR is well extended and capable of delivering good sub-bass rumble when called upon, but is extremely well controlled. Mid-bass is tight and articulate if very slightly behind the lower mids. I heard no mid-bass bleed and the transition from mid-bass to mid is very clean with no coherency issues on the transitions.

Mids:   Mids are again extremely well controlled and tight with the lower mids being slightly (and I mean very slightly) elevated in comparison to the upper mids.

Treble:   Highs are deceptive in that the ESR is extremely well extended but not forward of the rest of the signature. I heard no tendency toward sibilance even with what I would call a fairly aggressive attack speed that makes high-hat sound particular realistic.

With the ESR being designed as a studio reference, rather than focus on the normal low/mid/high of my reviews, the focus needs to be on accuracy, detail retrieval, soundstage, imaging, and dynamics. I say this as the ESR is the blank canvas on which an audio engineer paints his masterpiece.   As such, we expect all things in equal balance at the outset and any tweaks to be immediately translated into elevations or decreases in the resultant sound.     The ESR does a great job in this respect. It is indeed just about ruler flat and responds to any change in EQ proportionally.   While the ESR at first tends to be a bit dull or lifeless, it is quite possibly the most tunable IEM I have had the pleasure of trying.   Perhaps the best thing about the ESR is the fact that EQ adjustments have very little bleed over into surrounding ranges and allow the user to tweak far more than most other IEMs allow.   I could make the ESR bass heavy enough to satisfy all but the most ardent basshead or bright enough to bother my dog without tainting the rest of the signature.   This is an amazing accomplishment and to me is proof that Empire’s discussion of their crossover technology goes well beyond marketing speak.

All that tweaking doesn’t help, if you aren’t hearing every element in the music, and for that reason the ESR has been given exceptional resolution with micro-detail being rendered effortlessly.  This lends to vocals being well reproduced and nuances of varying recordings of the same song are readily evident.

Soundstage is harder to judge as it is very track dependent and the ESR is extremely unforgiving of poor recordings.   Most of us find that as the quality of our gear improves, the size of our music collection decreases as we recognize more and more faults in things we had previously enjoyed. The ESR will definitely help you sort your music collection into the well mastered and not so well mastered categories. When fed a well-recorded and mastered LP like the Cowboy Junkies Trinity Sessions, the ESR is capable of delivering a soundstage with good depth, width, and height and a genuine feeling of space.

The same recording also does a great job of displaying the dynamics the ESR is capable of. From the almost whispered vocals to the thunderous bass guitar, the ESR handles it all well and never feels unnatural or strained even when pushed toward either limit.

For those who are opposed to using EQ, the ESR is going to be bland, lifeless, and boring even with its immense detail level.   For those willing to tinker with EQ, the ESR is a chameleon that is capable of being as subtle or as raucous as you encourage it to be.   If I could only have one IEM, I might well chose the ESR since I could tune it differently for different genre or differing moods.

The ESR is very definitely a niche product, it does not offer the most musical signature and is not likely to have people waxing poetic over the choir of angels in their ears while using them. For those who are in the business of critical listening or need to have an exact baseline to work from without any coloration or obscuration of elements, the ESR is for you.  I found the ESR to be easily more resolving than HD700 and on par with HD800 over ears while providing much better isolation and less treble coloration than either.   That is pretty high praise coming from me as I still think the HD800 is one of the best ever made and the 700 isnt far behind when looking for an analytical reference.