Disclaimer:  B9Scrambler was kind enough to provide me with a handful of IEMS that I had not had a chance to audition yet.  Amongst them was the Echobox Nomad N1a.  Thanks to B9Scrambler for his generosity and if you haven’t visited the Contrationist’s blog yet, you owe it to yourself to check it out.  Its a good read.

I had previously used and enjoyed the Finder X1 from echobox and had liked it a good deal.  While not perfect it was a great freshman effort and quite frankly far better than I had anticipated.  Having said that when given the chance to audition their new flagship, I immediately agreed.   If lessons learned were combined with the same quality of materials of the first generation product, it should be something special.

I received the Clamshell case containing the Nomad and its filters and tips without its retail packaging so cannot comment.

The Kit is well fitted with a small clamshell case holding the earphones themselves and a removable rubber tray that holds 6 sets of tips and 2 of the three sets of filters.  The tray lifts out so make it easy to get the filters in and out and has a firm grasp on the tiny filters which is nice as I suspect they would otherwise quickly be lost.    The three filters provided are black for bass, silver for reference, and red for treble enhanced.   Tips include two black silicone tips, two clear, a set of double flanged and a set of triple flanged with the single flanged tips having a decidedly spinfit like quality albeit of slightly softer more flexible compound. 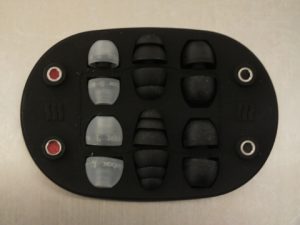 The earpieces themselves are a titanium shell with a soft silicone rubber cover on the inside.  I call it a cover rather than shell as it is removable to expose the screws that hold the driver together should you ever have a desire to disassemble them.  (I refrained).  The rubber cover matches the harder material used to house the mmcx connector at the rear of the outer shell and gives the earpiece a nice two tone appearance.  The titanium shell has a nice ribbed pattern with the echobox name in the center and the L/R markings clearly indicated on the lower surface immediately beneath the mmcx.  Nozzles have a forward rake and are threaded for the filters.  When a filter is not installed, the threads act as a lip for the tips to attach but no screen to prevent debris from entering the earpieces is present.  When a filter is installed, it provides a large lip for the tip to grab and also serves the purpose of a debris screen.   While the Nomad is not particularly small, the use of titanium throughout has done a good job of reducing weight and they are lighter than many earpieces of similar size. 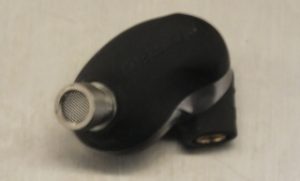 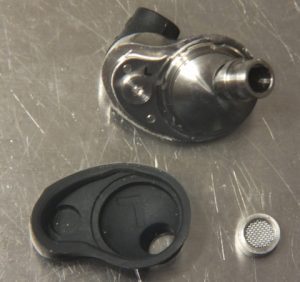 The Nomad again uses the PEEK technology first seen in the Finder X1, this time in the form of a 9.2mm dynamic driver.   The listed impedance is 22Ω with a sensitivity of 96 dB/mW making the Nomad very easy to drive using portable devices.   I did find that the driver scaled well and enjoyed listening using my Opus #1s at moderate volume level on high gain.

The cable provided uses a straight 3.5mm TRRS jack with a titanium housing to match the buds and a good strain relief (in contrasting black) as the cable exits the jack.  The cable itself is silver plated copper similar in diameter to that used on the Campfire Tinsel cable.    The splitter is black silicone rubber with a chin slider mated to the upper end and also shows good strain relief at its exit although having almost none at the entry point.   The microphone/remote is positioned rougly 6 inches below the earhook and puts the mic in a good position where it is suspended rather than rubbing against clothing.  The case on the remote is titanium with prominent knurling (improved over the X1) so I was hoping they would upgrade the buttons to matching titanium as well but they are still the plastic buttons as on the X1.  The rear of the knurling has an A imprinted for android and the remote did  work properly with a HTC m9 and Samsung S9 phone as expected.   At the north end of the cable we find pre-formed earhooks followed by black rubber housings for the mmcx connectors.  These again have a short strain relief that when combined with the earhooks should provide good durability.

All my listening notes were done with the neutral filters and large sized Comply tips.  I tried to use the silicone tips but found isolation to be less than good due to the shallow fit.  The Comply tips did a much better job of eliminating outside noises.  This will be a consideration for those thinking of using these as a travel companion.   Notes on the other two filters are included in the sound discussion.

Sub-bass is well extended and mildly forward of the mid-bass which brings a nice thump to the Nomad.  Mid-bass is reserved and well regulated with only minimal bleed into the mids which gives the Nomad a slightly warm signature.   There is no denying that the Nomad is a V-shaped signature and the mid-bass, mids, and lower-treble are all in the trough to varying degrees.  At times this can make the mid-bass seem slightly distant or thin in comparison, but good detail and texture is maintained.

The mids definitely sit at the bottom of the V and are recessed compared to either end of the signature.  The silver filter does allow a bit more of the mid to shine through but even with that it is recessed and comes across as slightly thinner than I would like.   Lower register male vocals take a bit of a hit on this and can seem thin and nasal at times as a result.  As we move into upper register vocals we begin to climb out the trough and female vocals tend to be a bit richer and full-bodied than their lower counterparts.

Without question, this is the focus of the Nomad.  Treble is well extended and very emphasized unless using the bass filter which brings the treble closer to neutral but still not into line with the rest of the signature.   Cymbal hits are sharp without an overly metallic sound and detail level is very good throughout the treble.   I did find some sibilance using the silver filter (and admittedly on tracks that are prone to it) so avoided using the red (treble filter) as only the most serious trebleheads will likely need it to be happy with the sound.   For me, I prefer the treble of the black filter with the rest of the signature from the silver.

The stage on the Nomad is wider than it is deep by a good margin but has some height to it.  The width and height combined with excellent instrument separation and better than average layering make up for some of that lack of depth by keeping things from being congested in that small space.  I did find that the Nomad was able to keep up very well with tracks that got busy without getting muddy in doing so.   With the imaging of the nomad, I could see these being useful to gamers on the go as long as isolation is good enough to prevent distraction.

Treble is improved on Nomad compared to X1 with less of a pronounced spike in the lower treble.  Detail in the mids and lows are better which makes the Nomad sound cleaner and clearer overall. Bass is slightly more forward on the Nomad which gives the sound a bit more weight.   Both share recessed mids.

B400 is not as well extended on either end as the Nomad.   The B400 is much closer to neutral than Nomad which is deep V shaped.   Fit is about equal as shape is similar but build quality goes to Nomad by a good measure.

This one is a tough compare as the Comet is mid centric and much warmer/thicker than the Nomad which is treble forward and thin in the mids.  Both have outstanding build quality and both cables are roughly equivalent although I’d give a slight edge to the Nomad cable.   This one is going to come down to what signature you like best.

I must say that the Nomad is a good looking package all the way around and has a very good sense of design from start to finish as all elements seem to work very well together to make up the whole.  The only thing I found off-putting about the appearance was the black plastic buttons on the remote that do not appear to be of the same quality as the rest of the build.