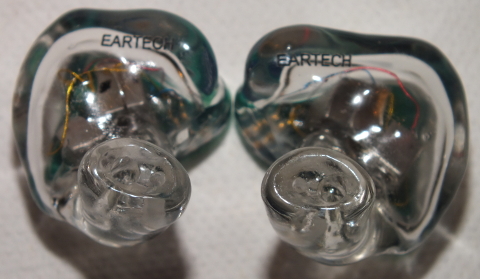 Eartech Music may require some introduction to some. Eartech Corporation was founded by an Audiologist who also was one of the founders of the ETSU Medical School’s Audiology program. For years, Eartech concentrated on improving hearing aids and the owner now holds over 200 patents in hearing aid technology. Some of his patients approached him about in-ear monitors for their church worship teams and Eartech Music began to form. Since its inception, the Music side of the company has focused on providing performers with monitors tuned to their needs. They offer six models mostly tuned for various musicians. Some offer extra bass punch, while others highlight vocals. For audiophiles and those wanting an in ear for critical listening there are two models of interest. The closest the Eartech models come to neutral (and it is very close) is their Triple driver model. When discussing my preferred signature with Richard (electronics guy at Eartech), I told him I wanted a near neutral with a bit of extra sub-bass energy without extra mid-bass and a bit of extra treble energy to give it a little extra sparkle. He suggested I try the Triple and the Quint but that the Hex might surprise me. I sat down, listened to all three, and found that the Triple is near reference flat, the Quint was closest to my preferred signature, and the Hex was the quint with bigger bass and less mids.Unboxing / AccessoriesI went to the Office and watched my iems being made so there is no unboxing to discuss. I have written up the experience here if you have ever wondered what went in to building a custom in ear monitor, it gives a detailed explanation of the process. My Quint came packed in a Pelican case with the cable, two desiccant packs, a cleaner, cleaning pad, and a shirt clip for the cable. Eartech goes so far as to print the labels on the case in house, they are a very hands on bunch. The one thing that didn’t come in the box was a balanced cable as they currently offer two lengths of single ended cables but do not have a balanced option. 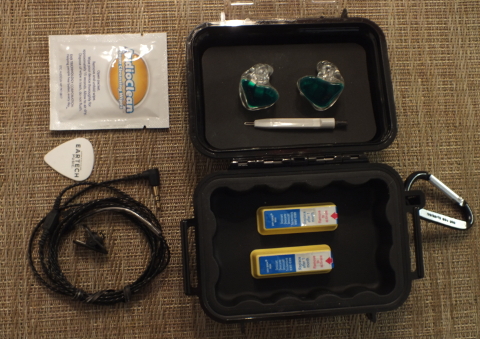 The Quint is a gorgeous IEM that is as much art as science. I chose clear acrylic for the body and hunter green translucent for the faceplate and I think it came out great. Fit is first class and comfort is spectacular. These are one of those rare iems that you can forget you are wearing. Granted, with the music off, the isolation does remind you they are there. 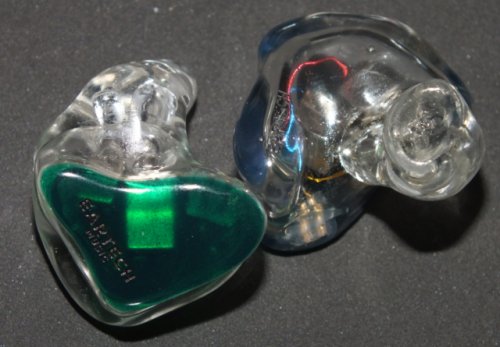 All of Eartech’s IEMs use a 0.78mm bi-pin connector for the cables that is well fitted and with the clear housing of the connector and my iem, it blends nearly invisibly. The Cable is black with a 90-degree jack and good strain reliefs at the jack, and splitter. At the earpieces, they have a memory wire encased in a clear plastic shell. For those who dislike memory wire, purchase of another cable may be a necessity, as removal of the memory wire will also effectively remove all strain relief from the connector at the earpiece. This could make for a short-lived cable so purchasing a cable with proper strain reliefs and no memory wire is probably preferable. 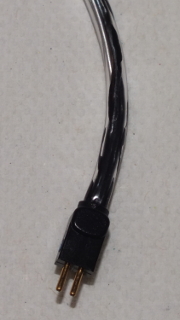 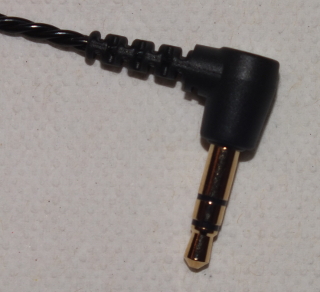 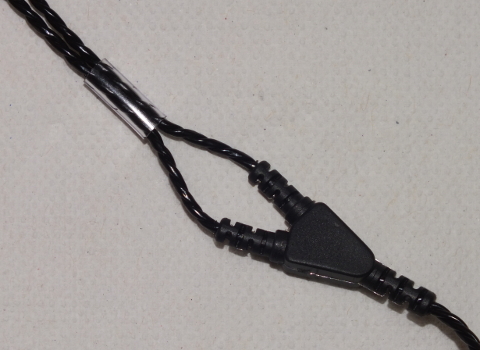 The Quint is one of the highest sensitivity/ lowest impedance models Eartech offers at 119 dB SPL / mW @ 1kHz and 16 Ohms. For this reason, they do not require an external amp and are well suited to use with a DAP or phone. Isolation is very good with a rating of -26dB. I did most of my listening evaluation with either an Opus #1S portable DAP or the Apogee Groove connected to my laptop. Both of those devices provide sufficient power that an additional amplifier was not needed.

One cautionary note needs to be added as we get into the sound discussion. The Quint is extremely revealing and not particularly forgiving of poorly mastered material. This is not just saying it doesn’t like 128k mp3 files, even 24/96 flac with flaws in the engineering are going to be rendered in such a way that every flaw is on full display. Some tracks that I enjoy listening to with lesser earphones are all but unlistenable with the Quint for that reason. If you are looking for a laid-back in ear that plays nice with poor recordings – this is not the product for you.

The Quint delivers tight sub-bass with plenty of quantity while retaining good tight mid-bass at a moderate level. There is no perceptible bass bleed into the mids and mid-bass stays well composed even on tracks that get exceptionally busy. This is one of the few IEMs that I have tried that elevates sub-bass without muddying the mid-bass range. For those who want a bit of extra low-end punch without it taking over the signature, the Quint does a great job.

Treble extension is very good and again treble is very well controlled. The Quint is advertised as being slightly treble forward and it lives up to its billing. I found no tendency toward sibilance, but with tracks that have sibilance recorded into them, the quint does render it properly, and it does come across as harsh. The extra energy gives the Quint great sparkle and cymbals are better rendered on it than on anything else I have tried to date.

The soundstage presented is largely controlled by the recording itself. It took me several listening sessions to realize this. Initially I wanted to list the stage as fairly well proportioned but not overly large, then I hit a track where the stage was just jaw-droppingly expansive and it changed my opinion entirely. I began looking for tracks I knew had a large stage and those I knew to be more intimate and playing them to compare. In each case, the Quint reproduced what I expected and showed it was capable of being intimate when called upon and voluminous when needed. The layering is good with large orchestral pieces showing no signs of congestion or crowding. Imaging is equally impressive with each instrument and vocal being easily identified and placed on the stage and movement of instruments in binaural recordings being spot on. 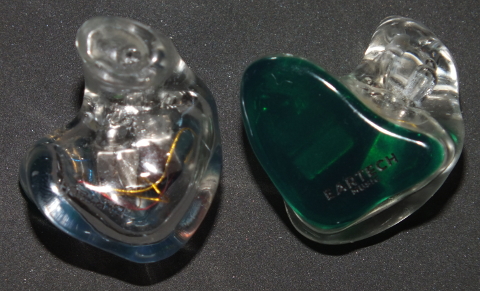 I have tried to keep my comparisons to IEMs at roughly the same price point and please understand that I had extremely limited time with some of these to compare as they were borrowed.

The Martian has less bass and is more mid-centric than the Quint which was unexpected considering the Martian’s dynamic driver vs the Quint’s all BA setup. The Quint also has a bit more treble thickness than the UM as the body on the UM treble can be a bit thin. Kit is roughly comparable on both but I did like the Martian cable a bit better than Eartech’s offering. Overall, both are stunningly good IEMs at their price point, but for my preference, the Quint fits slightly better.

These two are so different it is tough to compare them. The quint is assertive if not outright aggressive while the VS-4 is warm, laid-back, and treble shy (particularly upper treble). I found the level of detail better on the Quint and clearer as well. The Vs-4 almost seems to be intentionally tuned to be slightly fuzzy and that may well be part of what CT was trying to accomplish with the “Vintage” series. Bass is considerably more potent on the Quint while the mids are more forward on the Vs-4.

Very similar signatures between these two. The Quint has a bit more sub-bass and more upper treble where the 846 backs off the throttle as the frequency goes up in the treble range. Soundstage is larger on the Quint than the 846 but instrument separation and layering are about equal between the two. The Kit is a bit more complete on the 846 with both a soft and hard case and two cables although neither of the cables with the 846 were particularly comfortable and cable quality was about equal with that of the Quint.

The Eartech Quint is a strong recommendation as it competes very well against the bigger names mentioned above and does so at a price point that is considerably less than some of those same models.

I do wish Eartech would offer more options in cables as the stock features a very prominent memory wire which is not my favorite and a balanced option would be useful.

For anyone in the market for their first CIEM, I strongly suggest you check out Eartech’s line of products. (and my build journal). Somewhere in the choices is a sound signature you are bound to like. The Triple is near neutral and amazingly priced, the Quint brings a bit of extra energy and detail in all the right places for me, and the Hex should tick all the boxes for the bassheads amongst us.

For those not ready to take the custom plunge, I hope Eartech will consider releasing a universal version of their Triple and Quint as I think both would be good sellers. (I am not a basshead so you guys will have to lobby for a universal Hex if you want one).

The biggest problem the Quint has created for me is that I know the budget I am going to need to beat it. Until I have at least $1500 put back, I’m going to have a tough time beating this $600 headphone.