I received the Blue and a Fostex DAC/Amp as part of the Head-fi tour.   I have received no compensation of any kind for my review.

I will start this by saying that after receiving the Blue, I sat and thought about how many Fostex RP variants I own or have owned in the past.   I count no less than 6 and I am limiting this number to those that share the original T50 shell.  I’ve owned a few more with t-series drivers that had been reshelled by such makers as Mr. Speakers and ZMF but won’t compare to those as I think it unfair to do so.

The Dekoni comes packaged nearly exactly the same way the Fostex counterpart does.  Simple cardboard box, with headphones and two cables in bubblewrap.  Not the most elegant arrangement and if I were shipping long distances a bit of extra padding would be appreciated here.   It is a pretty no-frills packaging but at the price point of the Blue, not wholly unexpected. 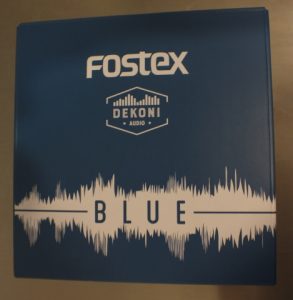 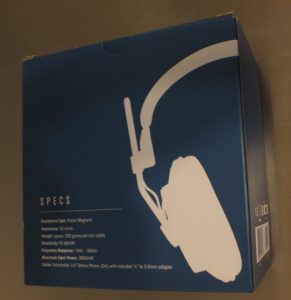 Those familiar with the RP series will find the Blue to very similar.  The Blue does have a serial number displayed on the inside right of the headband that isn’t present on the t50 and I like the subdued black of the sliders and cable between ears when compared to the original.   The only other visible difference between the Blue and the t50 is the pads.  I have long since replaced the pads on my t50 models with ZMFs or others as the stock pads are somewhat atrocious.  Dekoni has done a great job creating a pad for the t50 that is both comfortable, doesn’t overheat, and works well with the sonics of the shell.  I traded them for a ZMF pad on my Classics just to see what contribution the pads play in the sound and found the Dekoni to be every bit as good or better than the ZMF pads on both headsets.   If you already have an RP series headphone and are not in the market for the Blue do yourself a favor and at least order the pads, you wont be disappointed. 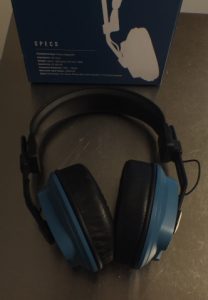 The tour unit shipped with the 6.3mm twist lock cable but again unlike the Fostex counterpart, it is shortened from 9 to 6 feet and the connectors are gold plated instead of chrome(Fostex).  Product documents show the Blue in retail form also ships with a 3.5mm cable so I have to assume this went awol on the tour sometime before the blue arrived.  I used the standard orange version of the 3.5mm cable from my stock to test with portable sources in the absence of the Dekoni version.

Dekoni doesn’t list any changes made to the drivers so I started with the assumption that the Blue would be relatively hard to drive.  The fact that a fairly high powered amp was provided for the tour also hinted that Dekoni wanted to make sure the testers had an amp of adequate power to enjoy the blue.   For my testing, I used my Burson Fun amp paired with a recent acquisition, the Audio-GD R2R-2 (Birthday gift from SWMBO).   This pairing has more than enough power to wring out everything the Blue is capable of and enough detail to really be able to test the limits of the Blue’s resolution.   I will say that having not had a chance to audition the little Fostex dac/amp that came with the Blue I was impressed with its output power and ability as well and it was a good match for the Blue within the limits of both.   I’ll write up the dac/amp in a separate space.

For testing with portable gear, I used the Opus #1s and the Xduoo XD-05 with Burson’s V5i op-amp installed.  This was the most potent combo I had and if you are going to use the Blue as a portable headphone I would encourage you to investigate either the Xduoo or the iFi BL if budget allows.   The Blue is a power sponge and will take everything you can give it.

Dekoni  has outdone themselves and I will readily admit to fighting the urge to take a screwdriver to one of the housings to see what black magic they have done inside.   I have always thought one of the faults of the Fostex rp series driver is that it rolls off fairly high up and bass extension cannot be made all that great.  I’ve had several pairs that had good bass quantity due to various mods, but never has the bass reached as deep as the 900 series fostex or many other planars (Oppo).   Dekoni has found a way to coax every last bit of extension out of the driver and boosted the quantity  while still maintaining reasonable clarity.  Mid-bass is pushed forward but no perceptible bleed into the mids was present leaving a nice warm signature with adequate bass detail and good impact.    Those lamenting the lack of bass in the t50rp will appreciate the angled pads of the Dekoni as they bring a bit more thump.

Mids on the Blue are mildly recessed when compared to the mid-bass but still enough ahead of the treble to produce an overall warm and slightly dark sounding headphone.   Details on the mids are good and parallel what we have come to expect from the RP series.  I think Dekoni did very little to tune the mids of the original t50 and that is ok with me as it is one thing the t50 did reasonably well out of the box.

Dekoni has done something to the treble on the Blue that makes it slightly less fatiguing and notable less grainy than the original T50.  This is a subtle change as at first I would have told you that like the mids, they had not altered the sound, but as I listened more, I realized I wasn’t hearing the grainy treble I did at times with the t50 and my ears were not getting nearly as fatigued as they had with the t50 listening session preceeding the blue.

The Blue is very much a t50 when it comes to soundstage as the stage is deeper than wide with acceptable but not spectacular height.  I do think the angled pads help deepen the stage a bit but do nothing to widen it and may actually narrow it a bit when compared to flat pads.

The Blue images well and with its quick attack and decay some gamers may find the Blue to be a good all-around headphone that can be used both at the gaming system and when listening to their favorite LPs.

Dekoni has smoothed off a lot of the rough edges of the t50 and while some will dismiss it as something they could do at home for half the expense and a couple hours effort, I don’t believe that is the case.   I have modded several t50s over the years and can honestly say that none of my home shop versions are as good as the Blue.   Some modders may be more skilled than I am but I suspect without a 3d printer to rework the geometry of the baffles, you’d be hard pressed to replicate the Blue.

Dismissing the fact that the Blue is a t50 variant and looking at it as a standalone for a moment.  Blue does a lot right.  Bass is good both in quantity and depth, transitions are smooth and flowing, treble is non-fatiguing and overall the warm signature lends itself to prolonged listening sessions.  In talking with a friend I said the Blue was nearly as addictive as the Campfire Cascades if not as resolving or quite as extended.    I can also draw a comparison between the Blue and the TR-x00 models which puts the Blue in good company.    I think regardless of their pedigree, the Blue stands on its own as a very solid $250 headphone and is well worth a look. 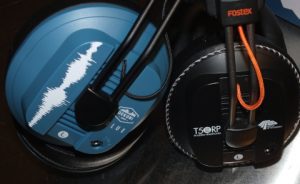