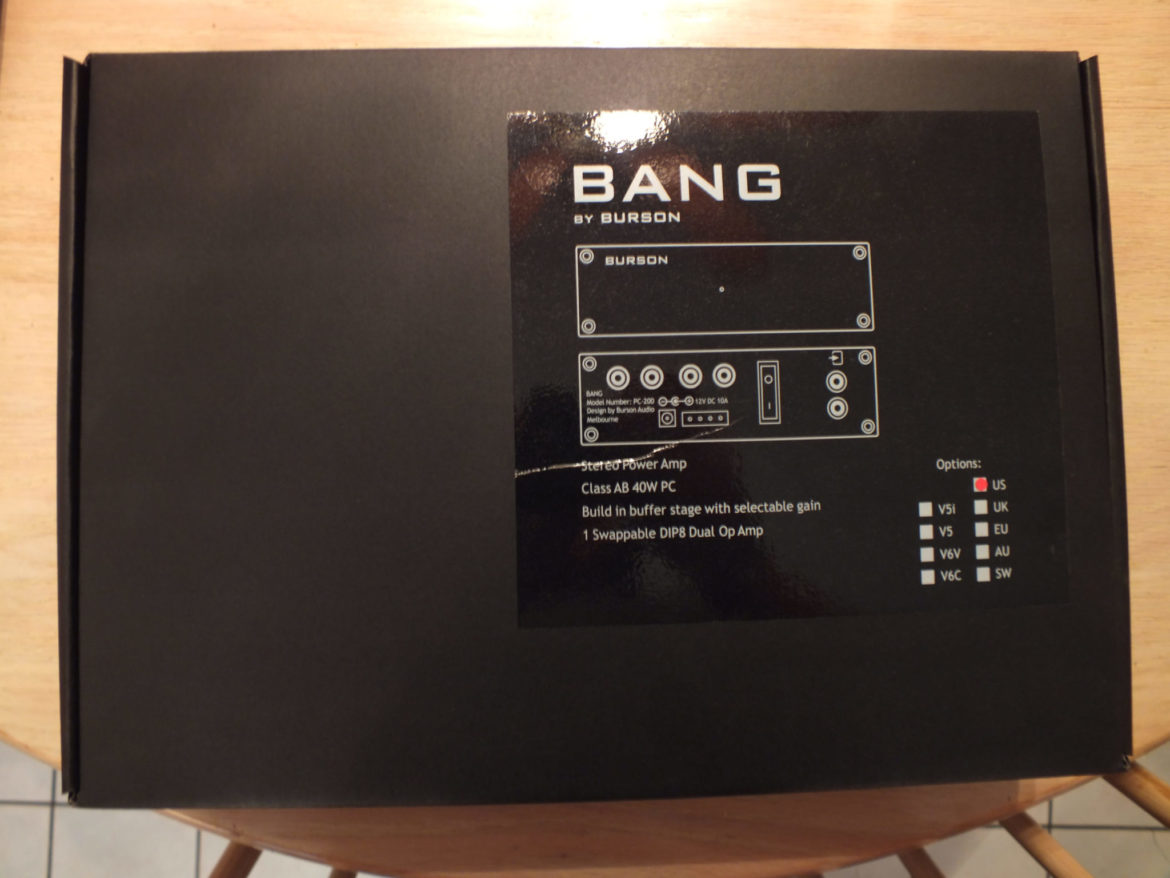 The Bang is for those like me who use desktop speakers instead of powered monitors with their computer audio setups.  Paired with the Play’s or Fun’s pre-amp outs, the Bang provides 40 watts RMS of clean two channel output again with customizable sound using Bursons V6 family of Op-amps.

Burson ships all three of these siblings in a black pressboard box with the details of what is inside on the top.  Inside the box the main unit is protected by closed cell foam in the center of the box with a small accessory box on either side containing connectors, power supplies, and an allen wrench for opening the case should you want to change op-amps.   While not the heartiest box on the market, it does a good job of protecting the device for shipment and should last well unless used repeatedly for shows etc.  (I’d advise purchase of a pelican style case for such purposes).

The Bang ships with very few extras, but it really doesn’t need many.  In the box you will find the power supply, main unit,  a set of RCA interconnects, and the allen wrench for removing the unit cover.

All three siblings share very similar black anodized aluminum cases which fit in a 5 ¼ drive bay in a PC if desired.  All have a Molex connector for powering from a PC power supply in addition to a connector for an external power supply (provided with the unit).

Each sibling has different face-plates depending on the controls and jacks present.  The Fun lacks the digital display of the Play while the BANG lacks any front panel controls at all.  On the rear(from left to right) are the Output binding posts over the external power jack and molex connector for PC power, the Power Switch, and RCA inputs at the far right.   Worth noting is the binding posts are for banana clips only and do not unscrew.

The upper half of the case can be removed by removing the two upper screws on both the front and rear faceplates.  I found that loosening the lower screws about ½ turn aided in lifting the top without scratching the inside of the face plates in the process.

The inside of the lid has a diagram that details the components and positions of each.  This is particularly useful when changing op-amps. This is certainly a nice touch as manuals are often nowhere to be found when one sets out to change op-amps etc….

The Bang uses 4 distinct MCPS circuits to feed the Class AB dual mono circuitry.  Burson touts the Bang as the smallest footprint true class AB available and its size is comperable to a lot of other vendors Class D offerings.

The Bang also offers the buffer of the Cable+ system to allow for adjustment of input impedance to match your source.  This is especially critical since the Bang relies on the pre-amp for volume control.  Mismatched impedance is a real possibility with devices ranging from <25 Ohm to over 300 Ohm depending on type and manufacturer.

The Bang uses a (1) Dual Op-amp that is shared by both channels.  This makes perfect sense as it prevent mismatched or imbalances between channels that would be more probably if using single op amps in a one per channel arrangement.     This does give the option of using one of Burson’s discrete op-amps and Burson offers the Bang with either the V6C, V6V, or Ne5532 op-amp.  A host of others are pin compatible and Burson is one of a very few companies that encourages op-amp rolling and doesn’t void the warrantee for doing so.

I found when stacking the Fun and Bang a Seasonic SSR-600TL 600 Watt fanless PC power supply did a good job of running both without any stress to the supply’s voltage rails.

Burson rates the Bang at 40 Watts RMS into 4 Ohm.  Since most home speakers are rated at 8 Ohm, the average output power will be closer to 30 Watts than 40, but understand this is RMS, not peak, and is a true rating rather than the inflated ratings so many consumer brands use today.

I tried the Bang with KEF Q350s, Klipsch Heresy II, and even a power hungry Magnepan 3.6/R.   The KEFs were driven extremely well by the Bang. The Heresy II was, if anything, a little over driven as I didn’t have nearly as much usable volume control with those as with the KEF or MG.   The MG 3.6/R paired with Levinson 20.5s has been my mainstay for quite a number of years and while I love the sound, I will readily admit that at 86dB and 2.8V/m, the MGs are not easy to drive well.   I fully expected the Bang to be unable to drive the MGs as they are well beyond what should be expected of it.  While I would not recommend torturing this or any amp with a load so far beyond what it is designed to handle, I will concede that Burson’s claim that this amp can keep up with many amps rated at three times its specs appears to be true as I was able to get reasonable listening levels out of the MGs without any obvious distress from the Bang.

I did ask Burson if the Bang was 2 Ohm stable but have not received a reply, I’ll add it when I do.

I tried all three op-amps that are offered with the Bang and found less difference here than either the Play or Fun as I think the sound is more highly dependant on the DAC and speakers than the op-amp in the amplifier.  I have previously written up the Burson V6 products here, so wont re-write all those details again.

Burson now has a complete line of desktop components in the Play (DAC/AMP), Fun (AMP/pre-AMP), and Bang (Power-AMP) that are extremely price competitive and rank at the top of their class in technology and design.  So now you have options, Play around, have some Fun, or Bang it out on your speakers, either way Burson has you covered.