Disclaimer:  Penon Audio was kind enough to send me the KB100 for review.  I have used several other BQEYZ products in times past and have found their products to offer good value.  Penon had the KB100 made by BQEYZ to their specifications and it is only available through Penon Audio unlike other BQEYZ models that are available from multiple outlets.  I do not have any financial interest in Penon Audio, nor was I directed to write anything by anyone so thoughts here are my own.

Packaging is the standard black pressboard box with silver logos and wording.    Model specs are printed on the bottom of the box and model number is found on the label on the side of the box.  Interestingly this allows re-use of the same box but would limit BQEYZ to making all models packed in the same box the same impedance and sensitivity as it is printed on the bottom of the packaging.   Inside the box the earpieces with cable attached and the spare tips sit in a foam shell with a paper overlay.   The bulk of the cable is hiding under the card along with the instructions and warranty card.

Inside the box the earpieces with cable attached and the spare tips sit in a foam shell with a paper overlay.   The bulk of the cable is hiding under the card along with the instructions and warranty card.    Three sizes of Silicone tips are provided and Penon is adding a set of JVC Silicones for a limited time when you order the KB100.   No case is provided, but that is not uncommon at this price point.

The Shell is machined aluminum with the choice of two tone red/black or solid blue anodizing.  Why they went bi-color and not solid red, I am not sure, but I like the color mix.    Fit between the faceplate and body is very good with no obvious gaps or glue exposed.   Faceplates are solid with the bqeyz logo and a chrome ring outlining the shell.  L/R are prominently marked on the outer shell immediately below the bi-pin connectors.  Vents can be seen on the inner side of the shell with two on the body and a smaller one at the base of the nozzle.   The nozzles are plastic and like all of the BQEYZ so far do not have a lip to retain tips. I have never had a problem with tips coming off so am not concerned as the nozzle is large enough to give the tip good purchase.    The bi-pin connector is recessed about 1.5mm and requires a cable with small enough housing to fit in the recess in order to seat properly.  This may limit which aftermarket cables will fit.

The KB100 is a triple driver hybrid with two dynamic drivers and a single BA with a nominal impedance of 15Ω and a sensitivity listed as 105dB.    No additional detail is provided on size or type of drivers on either the Penon or BQEYZ pages that I could find.    I found the Kb100 to be easily driven using a smartphone but it does scale well with a bit more power and was at its best when paired to the xCAN or AK70mk2.

The cable starts with a 90 3.5mm jack with a proper strain relief and braided 3 wire cable exiting to the splitter emblazoned with the BQEYZ name.   A small clear chin slider fits immediately above the splitter and the wires terminate with a pre-formed earhook and a bi-pin .78mm connector.   I find the pre-formed earhooks to be overly done and have found that putting the bi-pin connector in a small vise and pulling the wire out straight and then heating with a heat gun for a few seconds at a time allows you to relax the earhook a bit so it isn’t quite so kinked up.   If you attempt this, go slowly with heat as it doesn’t take long to melt the coating off entirely (which is also an option for those that prefer it). 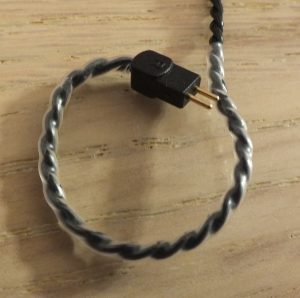 Bass depth on the KB100 is as good as any of the BQEYZ lineup and most similar to the BQ3 in depth and quality if not as pronounced.   Bass quantity is only slightly elevated with more of a mid-bass push than sub-bass.   This gives the KB100 a slight warmth without perceptible mid-bass bleed and without the attendant loss of detail in the mid-range.   Transition between bass and mids is clean and very smooth.

Lower mids are very mildly recessed but still have good detail and timbre while the upper-mids are again pushed forward to give vocals a bit of extra energy.   This is a very mild push so I would stop short of calling this a mid-centric in-ear.  What the push does do is give the vocal just enough extra energy to sit in front of the other instrumentation.

Lower treble follows from the upper mids then dips as it moves into the treble range.  Upper treble climbs back up slightly around the 11kHz mark which gives the Kb100 good air and sparkle without being harsh or strident.

Soundstage on the Kb100 is wider than deep but not my nearly as much as some other models in its class.  I would say the depth is 3/4 of the width and neither dimension feels small or crowded.  Some height is presented as well when listening to live performances with moving instrumentation.   Imaging is fairly good, but occasionally seems to put instruments one behind another rather than beside each other.   I found footfalls in games to be appropriately placed so this in ear would also be usable for gamers.

My understanding is that BQEYZ made these to Penon Audio’s specification.  If that is the case, Kudos to Penon for requesting an excellent signature and to BQEYZ for delivering on that request.   The KB100 is an easy recommendation for those looking for a near neutral in-ear in this price range as it competes well against the likes of the Tin Audio T2 and other favorites at this level.   The KB100 does an awful lot well and while it won’t satisfy the bassheads in the lot, it does make a good all-around daily in-ear as it has no glaring faults, doesn’t get overly fatiguing, and is just plain an enjoyable listen.     I currently have my pair matched with the Cayin N3 and xDSD for use on the road and couldn’t be happier with it.