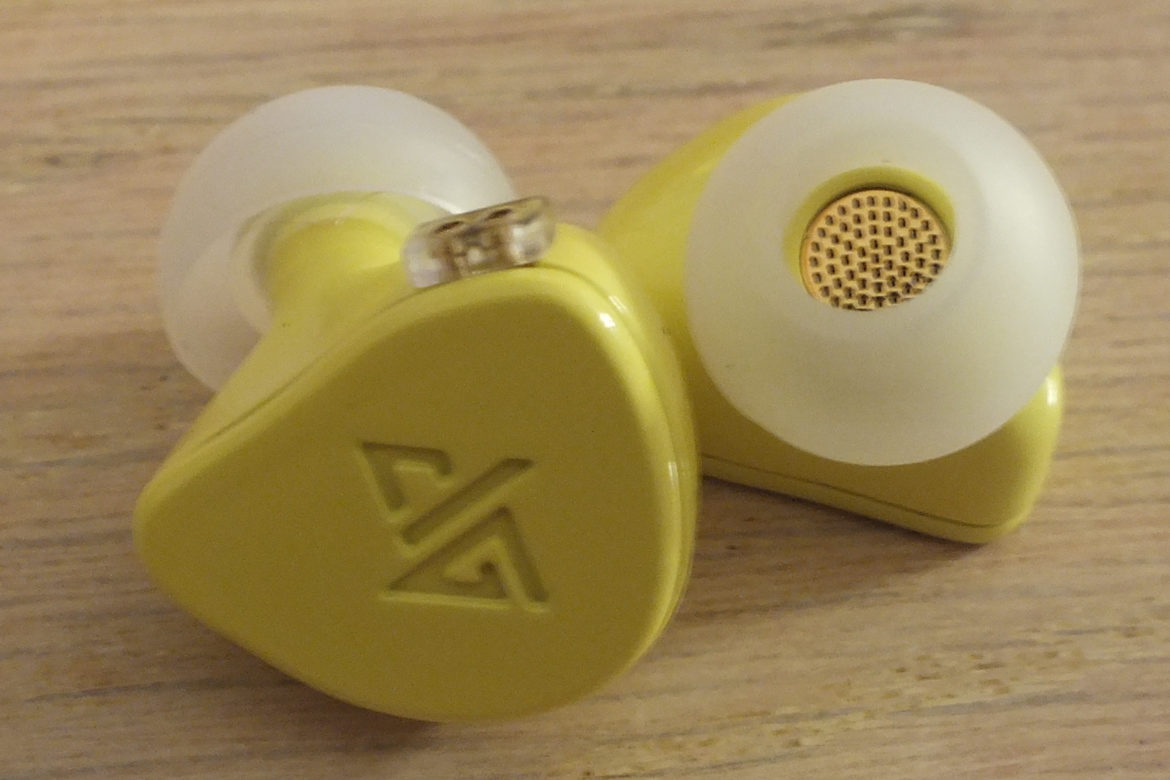 Disclaimer:  Penon Audio was kind enough to send me the Auglamour F300 for review.  I have used several other Auglamour products in times past and have found their products to offer good value so was interested to see  if the F300 continued the trend started with the F200, RX-1 and R8.   I do not have any financial interest in Penon Audio, nor was I directed to write anything by anyone so thoughts here are my own.

The F300 comes in a slip cover package with the Logo, model name, and a line drawing of the iem on the front, and the specs in Chinese and English on the reverse.  Removing the slipcover reveals a black pressboard package with the subdued AG logo in the center and no other markings. Lifting the cover reveals a box with a compartment at top for the earpieces and another below for the soft case and accessories.

The kit isn’t huge, but is well thought out and contains only useful items.  Three sizes of Silicone Tips (One each of Large and Small and 2 pairs of medium), a shirt clip, the soft case, formed earhooks, and a cable tie ;are the items in the box with the earpieces.  The earhooks are a curious addition as the cable has pre-formed earhooks on it already and then the heavier fixed earhooks are provided in the kit in addition.  The manual provided is more comprehensive than many and is printed in English on one side and Chinese on the other.    The soft case is a leatherette outside with the AG logo stamped into the top.  Inside, the case is black cloth lined but does not have a pocket for storing tips or accessories separately of the main compartment.

The first thing many will notice is a huge change in design aesthetic.  On previous models, Auglamour’s signature has been battleship gray brushed zinc magnesium shells with art-deco like design. While that is still an option on the F300, several brighter colors are now available as well.   My review sample is canary yellow, and it can also be had in pink, black, blue, and green, as well as the standard gray.

The shells are a zinc/magnesium alloy casting that is then CNC machined to final shape.  The seam between the faceplate and body is very uniform with no slop, gaps, glue, or cant.   Finish is a multi-coat lacquer that Auglamour refers to as the Piano painting process.  The finish is very uniform in both thickness and color.   Faceplates have a large stlyized AG cut into the surfaces.  Vents are present on the inside of the shell behind the nozzle and at the rear of shell below the bi-pin connector.    The nozzles are fairly short with a pronounced lip and a forward rake. Grills are brass with ports in a circular pattern.   Connectors are .78mm bi-pin raised connectors with a corresponding recess in the cable.  This is very similar to the ZsN but cables are not interchangable as the F300 has a slightly thicker connector so the ZsN cable will not seat.   No marking for left and right is needed as the design enforces tip up wear.   Worth noting the L/R markers on the cable are difficult to see as they are on the body of the connector that is clear with metal internals that do not lend themselves to making the markings visible.

Fit is very comfortable as they sit in the ear but the combination of a reletively shallow fit and a short nozzle may require that longer than normal tips be used by some to get a proper seal.  I found the large tips worked fine for me, but would have liked the nozzles to be a millimeter or two longer as it would have made fit a bit less fiddly.

The F300 uses a single dynamic driver with a diameter of 10mm that Auglamour lists as a composite dynamic unit using polymer composite titanium diaphragm.   Nominal impedance is listed as 16Ω with a sensitivity of 102dB/mW.    The F300 is easy to drive from a cellphone but does benefit from a bit more power and really does scale well when given sources that can.    While others seem to be in a race to add drivers, Auglamour seems to have spent its time refining its single dynamic offerings as the F300 uses a similar 10mm dynamic to the R1, R8,RX1, and F200 offered previously.  Where the F200 sported a graphene coated driver, the F300 uses a titanium coating.

The Cable is a 5N Oxygen-Free Silver plated copper cable with a kevlar outer wrap.  Starting at the Jack, the cable uses 3.5mm straight TRS jack with a brushed aluminum case with flats cut in the sides to improve grip.  A proper strain relief is present at the rear end of the case with a two pair twist exiting the jack running to the splitter which is also brushed aluminum with a small AG logo.  No strain reliefs are present on either side of the splitter.  The cable exits the splitter as two smaller two wire twists leading up to a pre-formed earhook, and a clear bi-pin connector with a corresponding recess to match the extension of the connectors on the earpieces.   Overall the cable is supple enough that microphonics are kept to a minimum and with the added shirt clip, any remaining movement is minimized as well.  This cable would be expected on a higher price point model, at this price point, it is comparable to many other brands upgrade cables.   The cable alone would cost most if not all of the asking price of the F300 at most of the Chi-fi vendors and makes the F300 an exceptional value when combined with its other attributes.

It should be noted that isolation is only average at best due to the shallow fit and short nozzles.  This can be improved with longer tips but comfort suffers to a degree as a result and  some tips alter the signature more than others.    I did my listening using the provided large tips as they gave me the best fit.

The Frequency Response was measured using my test system.  Keep in mind this is uncompensated and while I use a calibrated mic and soundcard, results are only comparable to other results from the same system.    As you can see, FR comes very close to the Target curve with no pronounced spikes or dips.

The F300 exhibits good bass depth and quantity without being overly bass forward.  The most interesting thing about the bass is the difference in attack and decay speed.  Attack is very fast while decay lags slightly behind it which at times makes bass seem a bit thick on tracks like VT- Blues hand me down and JL – Blew up the house.    Overall, bass is well controlled with no perceptible bleed into the mids and good timbre.  Most of the time the decay speed is a non-factor, I only found it when tracks were bass forward anyway and it be tied to a particular mastering technique as I couldn’t find a way to judge which tracks were likely to be noticed in advance of trying them.    Don’t take this as a serious criticism as at this price point bass is still well better than expected.

Mids are slightly behind the bass without a lot of bleed so can seem a touch dry and cold. (Nice for a change as too many at this price point are overly warm).   I found acoustic guitar to be particularly well rendered with a very natural voice.  Vocals are pushed forward by a bit of extra energy in the upper mid/lower treble range which can be both a good thing and a problem depending again on the recording.  Most of the time I found it pleasant but did find a few tracks where a -2dB between 2.5kHz and 3.5kHz was helpful to bring the vocals back in line with the rest of the signature.  Again, not an overwhelming fault, but something that some may notice and want to adjust.    I did find that mids could feel a bit congested when playing YM-Rising force and a few 0ther speed metal tracks that really stress that range.

The F300’s treble has good detail but is only moderately extended with a pretty steep roll-off above about 7kHz.  This causes the the F300 to lose a bit of sparkle and air but it still manages to feel more open than the graphs would suggest.  I liken the F300 to the Mee Planamic that had a similar roll-off to the treble but still managed to feel more extended than it actually is most of the time.   The F300 doesn’t sound dark or shut in due to the treble but could use better top end extension.

Soundstage is better than average for this price point.  Width is fairly large with depth falling behind width by roughly 1/3rd.  Imaging is very good with Instrument placement being accurate even with larger orchestral pieces.    Footfalls and vocals move fluidly around the stage and show some sense of height.     If there is fault to be found, (and at $35 I find it very hard to call it a fault) it is that the sometimes slow decay can make it feel a bit busy or congested when tracks get exceptionally complicated.

The F300 presented a challenge for me as a reviewer.  It is entirely better than it deserves to be at $35 and comes pretty close to matching the Harman target curve for iems.   I found myself comparing it to things way above its price point (Mee Planamic) and then telling myself that it isn’t that good because it can’t do something as well as a model that costs 10 times its asking price (Flc8N).   I think that is the mark of an exceptional value when you have to go well above their asking price to find suitable competitors.  It doesn’t make this a perfect iem, but it comes closer than I imagined possible for so little money.