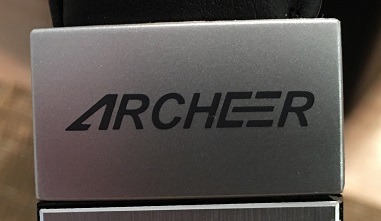 Archeer approached me about doing a review in exchange for a sample set of the AH07 headset or the AH225 bluetooth speaker. I don’t own any Bluetooth speakers and really don’t have a lot of opportunity to use one, so I declined that review sample but gladly accepted the AH07 headset. I’d like to thank Archeer for the AH07 and their trust in me to do an objective review.Will the AH07 be the Bluetooth headset that finally convinces me to use them instead of a wired model?

The AH07 arrived in the typical brown cardboard box with a neatly fitted black box hiding inside. Graphics are good, well laid out, and explain what is inside well. Inside the box, it is pretty spartan. When you first open the box, all you see the headphones sitting in a plastic tray as below. 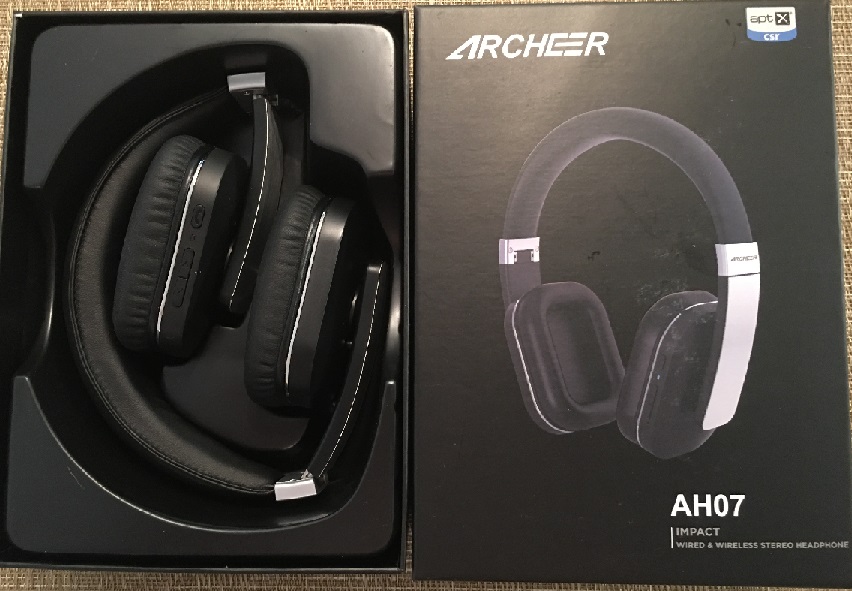 The Phones fit snuggly between the box lid and the plastic insert and the insert is fitted well enough that little movement is possible and damage during transit doesn’t seem likely.

If you didn’t think to lift the plastic tray, you would miss what little else comes with the AH07. That being a thin manual, a 3.5mm cable, and a usb/charging cable. 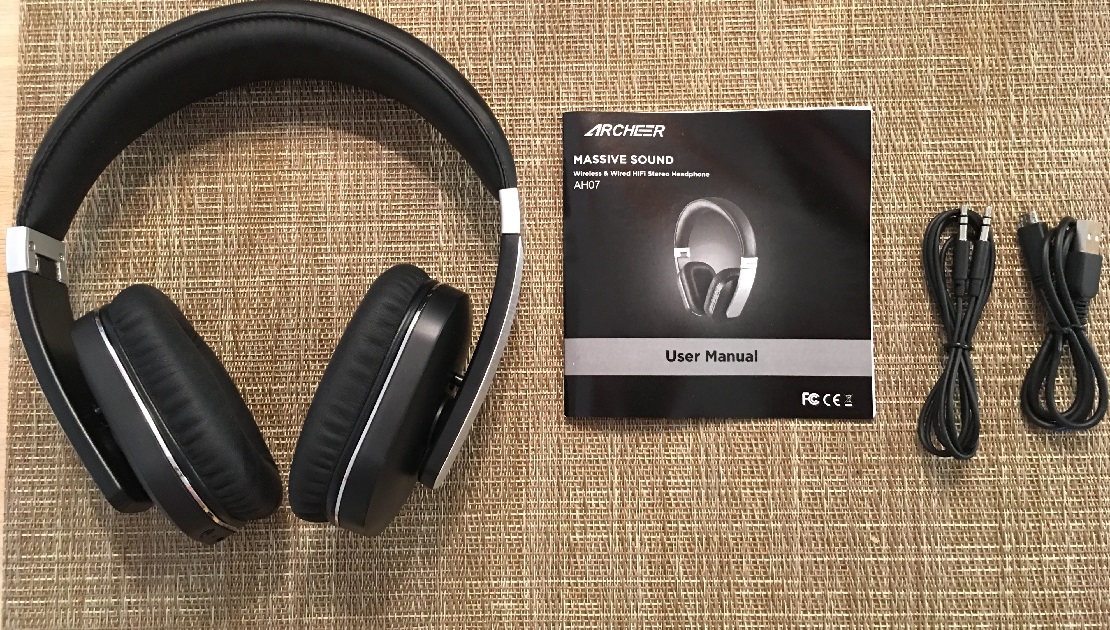 In fairness, the only thing I think the package is really missing is a carry bag for the phones themselves and the charging cable (maybe a side pocket for the cables – more later). The manual is complete enough to make getting the AH07 up and running easy and after charging the headphones overnight it took less than 2 minutes to have them paired with my phone and listening to music.

Build quality was an interesting mix of great and ordinary. Particularly impressive is the hinge between the metal portion of the headband and the upper plastic portion. When I first unboxed these, my thought was “Ok, so how long is that hinge going to snap in place as the plastic wears”. Good news, Archeer thought of that too and the hinge is reinforced with metal inserts so no plastic on metal contact is present. I must say, that is in impressive piece of engineering that shows good attention to detail and was not something I expected at this price point. 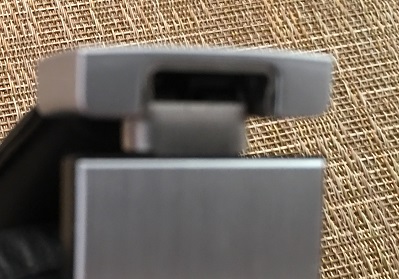 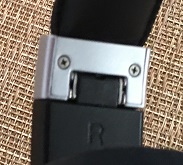 L and R are clearly marked on the inside of the headband just below the hinge (as shown above) and the controls are behind the ear on the right side. Being a lefty, I would have liked them on the left side but knowing that I am in the minority I understand the reasoning.

Controls are simple but effective. Volume Up/Down and a Phone/On button divided by a multi-colored LED. Long pushing the phone button turns on/off. A quick touch of the same will answer an incoming call. Buttons offer a tactile response as well as beep codes to let you know you have reached min or max volume or as the device is switched on or off.

On the ordinary side, both the plastic earcups and the metal band are subject to scratches and within a couple of days, both were starting to show. A simple lined carry bag in the package would go a long way to preventing some of these and would be a welcome addition. 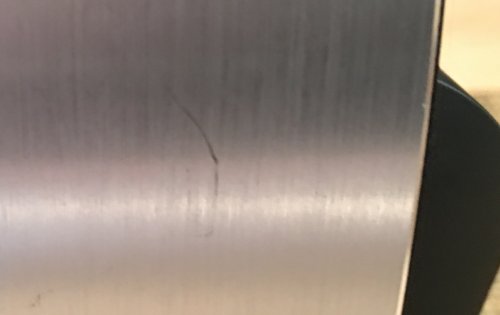 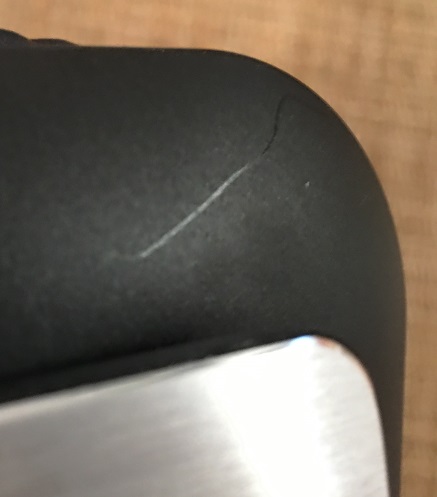 Confession time, I am an electronics nerd and have a serious battery testing setup (West Mountain Radio CBA) so I took advantage of it. I couldn’t find a mAh rating for the battery anywhere on the packaging but the test shows full discharge at 500Ma takes roughly 5.5 hours and equates to 1100mAh cell. The tester also registered the cell as a Li-ion type with a full charge voltage of 4.2 and a fully discharged voltage (when the headphones cutoff) of 2.9V. This is fairly deep discharge in order to extend usage time and may result in the battery lasting fewer cycles than a milder discharge curve would produce. For this reason, I would recommend not running the headset until it quits. I found that I could listen for 4 hours and then recharge without dropping the cell below 3.4V which is a much more battery friendly recharge slope and should make for a good long cell life. I don’t think the 14hour listening time is exaggerated based on these tests but I do think doing so repeatedly will limit the lifespan of the headset as Li batteries generally react poorly to that deep a discharge.

The microphone worked well for making and receiving calls. This was probably the best headphone mic I have used on a headset that wasn’t purpose built for phone use. It didn’t pick up a lot of extraneous noise and didn’t suffer from issues with wind noise. If sound quality on phone calls is a big issue to you, this is a headset seriously worth consideration. Voices were clear and plain and the microphone works very well. This was a pleasant surprise as the microphone on most of headsets is an afterthought at best.

I am a lover of blues, blues/rock, classic rock, and anything with good guitar work in it. For that reason, I chose the following as my test tracks. (artist, album, track, thoughts)

(it is worth noting that I tested with both the Bluetooth and the 3.5mm cable to determine if I could hear a difference in the amplifier built into the headset and using a different amp to run just the drivers.)

Bass: HUGE, Just massive, enormous, bordering on gargantuan. To say these are V shaped is an understatement, these are canyon shaped with the bass canyon wall being about a mile deep. Not much below 80hz, but at frequencies between about 100hz and 200hz these have immense punch. I found myself with a rather heavy EQ with dropping everything below 250hz by 8db in order to be able to listen for the mids as they otherwise vanish behind the bass. Bass gets a bit loose when not roped in using an EQ but for a design who’s motto is “Massive Sound” and “Impact” they hit that on the nose.

Mids: If you can find them, the mids do a good job with instrument separation and vocal clarity. In order to find this, you will need to EQ the bass and treble down between 6 and 8 db. Once EQ’d this can be a good listening experience and didn’t have any trouble with the speed of Blues Hand me down that can get muddy. I really like the sound of these once EQ is applied.

Treble: The other side of the canyon wall. Exaggerated, somewhat shrill treble is very revealing of poor source material. I was not particularly sibilant, but was tough to listen to for extended periods without EQ. Again, with a quick adjustment it brought them into a much more listenable range. Treble extension was not fantastic, but was on par with most other headsets in its class that I have had the opportunity to tryout.

Soundstage: Somewhat claustrophobic as most inexpensive closed back designs are. Separation is acceptable but it still feels a bit like you tried to cram the brass section into the backseat of a Beetle.

Wired Notes: The drivers do react well to amping and when run through the Magni 2 on my office desk, I find better separation of a bit clearer sound than with the Bluetooth. Not unexpected as Bluetooth does impose limits that the wired version does not. We also have to remember that weight and battery life are trade-offs being made in order to get a comfortable headset that works long enough to be useful.

Gaming: Not being much of a gamer, I handed these off to my daughter’s boyfriend to tryout with some of his games. He uses an Alienware laptop and found pairing to be a breeze and thought they performed well. He made note that without 5.1 or 7.1 some sounds did not place themselves as cleanly as he would have liked, but said for a headset not specifically designed with gaming in mind they did well. He particularly liked the comfort as he was able to wear them for an extended gaming session (6+ hours) without his ears getting overheated or battery life becoming an issue which I gather are both common problems from his comments.

I am not generally a huge fan of Bluetooth headsets, I think they usually cure problems I don’t have. Most of the time, a wire between my source and my headphones is not my biggest problem. Having said that, I really do like the utility these provide for moving around an office or the house while cleaning etc. I can see these being nice for travel, if I spent a lot of time in the air, as they isolate well and battery life (even with my caveat) is enough for most flights.

For those who love a bass cannon, this should be a headset you look into. For those looking for an analytical marvel, these will require heavy EQ as they are definitely aimed at the consumer V-shaped market. I think these do a solid job of hitting the target market, Big bass, V-shaped, easy pairing and use with Cell phones, good battery life, good call quality when paired with a phone, and looks.

I think an accessory bag to protect them would go a long way to preserving those looks and making them an even better value. Not sure why I worry about that as my daughter has now swiped them and they may never come home again. That alone is probably the best review I could give, teenager approved and in constant use amongst her friends.